The Erie Canal Trail and Rohrbach's in Rochester

This months Session is about the furthest distance travelled to a brewery or brewpub and the best beer found there.

Being a salesman for a small electronics company gives me a number of opportunities to explore new places each year. And while sometimes the schedule is too hectic to do much of anything outside of work, I am fortunate to get some good runs in and try out some local beers and beer establishments. The furthest brewery I've been to is Rohrbach's in Rochester, NY, which is 2,750 miles from my home in San Jose, CA.

I usually stay near the airport. Most people don't realize it, but the Erie Canal runs near the airport, and there's a nifty running trail on along its banks. The first time I found it, I stumbled upon it by accident in a rather ordinary industrial area. Turning onto the wooded trail was a welcome change of pace from the industrial surrounding. But soon, it seemed like running through a glorified drainage ditch with not a soul around, and just train tracks to keep me company. Another mile or two down the trail, and it empties into a wooded park area, where people were having picnics, generally having a good time, and yes, a few were out on a run. For about an hour or so, I'm part of the community before turning around and heading back on a great run in that started out as a boring trudge.
The Erie Canal was built in the early 1800's, an audacious plan at the time to connect the Great Lakes to New York City via the Erie Canal and Hudson River. Far from the expensive failure many predicted, it opened up trade in Western New York and helped create the cities of Buffalo, Syracuse, and Rochester.
So if it weren't for the Eric Canal, Rohrbach Brewery may never have existed. And wouldn't you know, John Urlaub, the owner of Rohrbach's is a runner, too! The brewpub less than a 10 mile drive west of the airport. Like any good brew pub, there's a neighborhood vibe upon entry. Everyone seems to be from the neighborhood and knows each other, but somehow, you don't feel like a stranger. I take my seat and once again, for an hour or so, I'm part of the community.

As for the beers, I had a sampler flight, which is what I usually have when at a new brewpub. Rohrbach's had a number of good to great beers over a range of styles. I always hesitate to pick a "favorite" beer, since I feel that depends a lot on the context the beer is enjoyed in. I really liked the Belgian Blonde, which my old notes say had "caramel malt with some snappy hops". I also liked their Scotch Ale, which had a "sweet, peat malt taste with some toffee". But if I had to pick my favorite, it's their Sam Patch Porter. Porter is one of my favorite styles, and I found this one to have a "strong, bitter, roasted coffee flavor". These are old notes, and part of this exercise is to either crack open a brew from the brewpub, or crack open something to compare it to. You can't get Rohrbach's in San Jose, so it looks like I'm going to find a substitute for Sam Patch Porter. And so to compare the Sam Patch Porter from the brewery I've travelled the furthest to visit, I'll compare it to a brewery close to where I live. And that would be El Toro in Morgan Hill, CA. So it's off to El Toro with my girlfriend Linda for some of their porter.
Morgan Hill is a small city just south of San Jose, the first place you come to when exiting the San Francisco Bay Area to the south. The place is an airy, two-level pub with a light brown wood interior. Behind the bar is colorful array of about twenty taps offering their very wide varieties of beer. The NHL and NBA playoffs are in full swing on the flat screen TVs scattered about the place. We take a seat, and a young waiter comes over. I ask for the Porter, while Linda is intrigued by the description of their El Canejo IPA, so orders that. 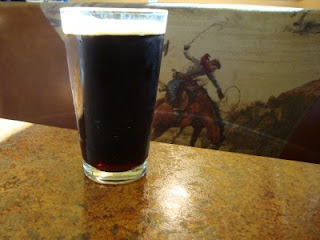 El Toro's Porter is different than Rorhbach's . Both have plenty of roasty malt goodness, but El Toro Porter is dominated by bitter chocolate notes with little detectable sweetness, instead of the coffee with some sweetness route of Rohrbach's. Both are mighty fine porters.
We were also impressed with the El Canejo IPA. It's highly unique, red IPA with good amount slightly sweet, roasted red malt, and plenty of slightly resinous, astringent hops bitterness. I found it well balanced, and much more so than El Toro's regular IPA. We order a couple more pints, and looking over the beer list, see plenty others we'd like to try someday.
One of the many great things about beer is that if you go far away or stay close to home, it provides a great opportunity to explore.
(Rohrbach's logo used with permission.)
at June 03, 2009