A Knock Out in Santa Cruz 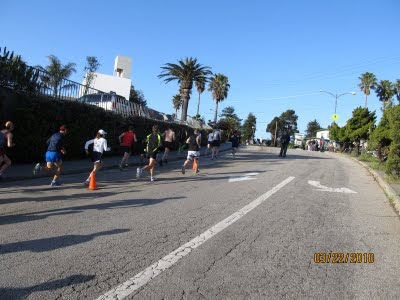 Thanks to my right hip, I took this picture of the start of the Santa Cruz Half-Marathon. Of course, I was planning on running this race, not taking pictures of it. Don't know what exactly is wrong with the hip, but it's screwed up pretty good. Since it seems unrelated to any particular range of motion or muscle action and is aggravated mainly by putting weight on my right leg, I fear it's a stress fracture. Hopefully next week my doctor can tell me what's going on.

It's simply amazing how quickly training can turn from great to disastrous. Four weeks ago, I ran a 5 mile race hoping for a time in the 31:00-32:00 range, and popped a 30:27. Things kept rolling, and eleven days later on a cold, windy rainy morning, I covered four miles of tempo running on the track at sub-6:10 pace in these difficult conditions, well below my 6:20-6:30 target. But then three days later, feeling a little tired going into a 15 mile timed run where I was shooting for 6:50-6:55 pace, I completely ran out of gas at 9 1/2 miles before staggering to the end. That's when the right hip soreness started getting noticeable, so I took a couple days off, did a couple light runs, before taking one big final 12 mile tune-up before the half marathon. The hip felt fine, and I stopped at miles 1 and 4 to check for any soreness or stiffness, but it felt good and while it stiffened up a little around miles 8-9 before subsiding, I ended the 12 mile run strongly, enthusiastic I was ready for the half marathon and my hip problem licked.

Except for a couple hours later, all I could do was stand awkwardly on my left leg with my right leg helplessly dangling from my torso. It's gotten better, albeit very slowly, but running a half marathon on it was likely going to end up in disaster, and quite likely some really nasty long term injury. I don't regret the risks I took to get to the starting line in what I thought would be the best shape possible. They were calculated risks that just didn't work out. This, unfortunately, is part of running.

Running is not like a Rocky movie. Just because you work hard and want it really bad, that big bad mean dude can still clock you with a right uppercut in the first round, and it's all over. Such is life.

But sometimes the good guys still win. My wife Linda worked hard for weeks too, and ran her personal best that day for the the half-marathon. So see, if you just hang in there and keep swinging, you still have a chance to take the bad guy down. 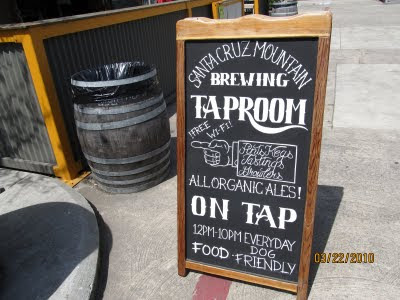 A good thing about drinking beer is that it requires very few functioning body parts. So a small consolation from being injured and not starting the Santa Cruz half marathon the next day was that I could have that extra beer without concern for any race day repercussions. So when Linda and I rolled into town, we first stopped at Santa Cruz Mountain Brewing for a pint and midday sandwich. The small tap room seemed a little spruced up from the last time we were there, and as always, a cross section of the diverse and slightly funky Santa Cruz population cruised through the place to get a growler fill or enjoy a pint for themselves. Hands down, our favorite for the afternoon was the Chile Chocolate Stout a special release available only from the tap room. While we both appreciated the dark chocolate flavors in the roasty malt, its rich character and slight sweetness, what really got us was it's mouth numbing tingly chile zip. The chile wasn't subtle, and for some people not particularly balanced, but for us, it was perfect. We also tried a sample of their barley wine aged 8 months in Chardonnay barrels. I thought the vanilla and Chardonnay flavors the barrel aging brought to the malty, toffee-like barleywine was rather interesting, but wasn't sure that the final product worked. Linda was sure it didn't.

Later that evening, we went with a friend for dinner at a place on Santa Cruz's West Side called burger. where oddly enough, you can order a burger from a wide ranging, eclectic menu supplemented by a tap list of no fewer than 48 beers. The Syd Barrett Burger I ordered was likely named for Barrett's legendary wide ranging and ultimately damaging experimentation with hallucinogenic substances, since it was topped with mushrooms. At least that's my guess, since I had to explain to the two twenty-something ladies behind the counter who Syd Barret was. There was a time explaining who Syd Barrett was made me feel cool, but now, it just makes me realize how old I'm starting to get. As for the beer, they have a few local favorites such as Santa Cruz Ale Works Red IPA complimented with the usual California craft beer suspects like Sierra Nevada, Anderson Valley, Green Flash, and Port Brewing was a few solid imports thrown in for good measure. If you want to get a good organically grown grass fed burger, yummy sweet potato fries, and a good beer, there's no better place to go than burger. But if you only have a half-hour to get a burger, you'll probably have better luck with the McDonald's across the street. 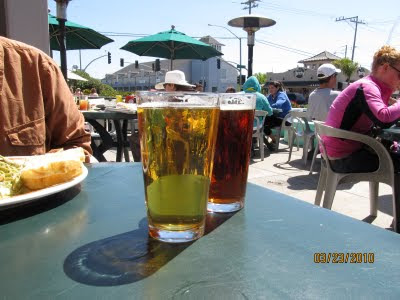 For Linda's Half-Marathon PR celebration, we headed over to Seabright Brewery where the outdoor patio that sunny day was filled with tired but jubilant runners adorned with their finisher's medal around their necks. Some of them were even limping around as badly as me. Linda and I started off with the The Freak Pale Ale, named in honor of San Francisco Giant ace Tim Lincecum. For a Pale Ale, both the malt and hop levels were as wispy as Lincecum's slender build, but for that late morning, light caramel flavors with a tea-like and slightly earthy hops made for a rather refreshing brew. Keeping with the San Francisco Giants theme, I also tried the Say Hey Wheat, their filtered wheat beer. Crisp and clear, with a nice wheat tartness and light citrus note, I could see why this was a popular post-race beer with many of finishers on the patio. And extra bonus points for Seabright not serving it with the standard lemon per my request. Linda finished with Seabright's Amber which had the requisite roasty malt and earthy finish one finds in a good amber.

As for you, Santa Cruz Half-Marathon, I am not finished with you yet! 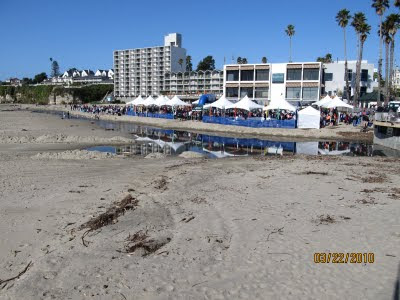