The Session #51: Stumbling Through the Session Beer and Cheese Pair-Off

For this month's Session, Jay Brooks of Brookston Beer Bulletin fame has asked us to find our best beer pairings for three different cheeses in the great Session beer and cheese pair-off.

Asking my opinion about beer and cheese pairings is like asking a blind man about sculpture. I just don't have the senses and faculties to describe the complete artistic experience, only bits and pieces of it. Beer has never really interested me for its culinary value. Instead, it's the history, economics, geography, and sociology surrounding beer drives me to write about it, not to mention I like to drink it. But of course, plenty of people write authoritatively on stuff like history or economics despite barely understanding those subjects, so I probably shouldn't hesitate to write about beer and cheese pairings, even while hardly knowing what the hell I'm doing. And this Session seems to embody the egalitarian nature of beer, where everyone can contribute and there's none of the negative elitism that seems to surround other beverages, most notably wine. (Which I also like to drink.)

So here goes. And I've enlisted my wife Linda to help with these pairings who often provides helpful advice when my thoughts go astray. In fact, she often advises me on all sorts of subjects, whether or not I've actually asked her for help. So what I did was pick two similar beers to pair with each cheese. I read a little about what the "experts" had to say about what beers pair well with the cheeses Jay selected for the Session. Then I picked a couple beers in the recommended style, and then Linda and I spent three evenings trying each cheese with their respective beer pairings, picking the winning beer in a head to head comparison. Here's the results. 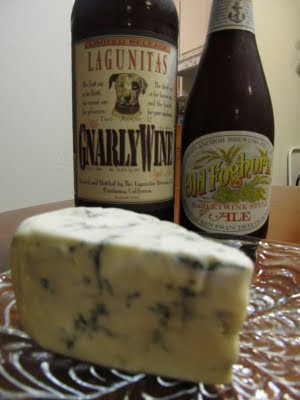 I couldn't taste much of a difference between the two pairings until Linda noticed the Gnarleywine being sweeter, contrasted better with the tang of the blue cheese. Then I began to notice that the more intense tasting Lagunitas barleywine held up better to intense flavors of the Maytag Blue than the Old Foghorn, where both the beer and the cheese just tasted flatter by comparison. So I had to admit my wife had a good point. I just hope that doesn't go to her head. 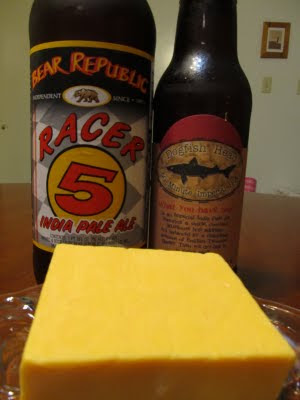 I went to at least five high end grocery stores looking for Widmer One Year Aged Wisconsin Chedder and came up empty, so finally settled for something from my neighborhood grocery store cheese section labelled "Three Year Old Aged Wisconsin Cheddar". Choosing two beers to pair with an aged Wisconsin cheddar was even a bigger challenge. It only seemed logical to pair a Wisconsin cheese with beer from Wisconsin, but it is not easy to find Wisconsin beers in the San Francisco Bay Area. Since the Green Bay Packers won this year's Super Bowl, I contemplated some sort of football pairing, but really couldn't come up with anything that made sense. Then I figured since Wisconsin is in the center of the United States, it would only be logical to test how cheese from the center of the country would pair from beer on the East and West Coasts. And least logical to me.

Since a few great beer culinary minds suggested IPA's go well with cheddar cheese, I picked an IPA from each coast. While the IPA is a hoppy beer style, East Coast IPA's tend to be more balanced, with the malt contributing to the flavor and the beer having a more rounded bitterness, while IPA's brewed on the West Coast tend to be unbalanced, with less malt and more hops with intense floral and citrus flavors. And thus over time, IPA's from the East Coast and West Coast gained reputations for their distinctive styles. It's a lot like East Coast and West Coast rap music, except no brewers have gotten shot over it.

Speaking of rap, Dogfish Head owner Sam Calagione is known to grab the mike and bust a few rhymes. And yes, his awkward raps on beer, which take unfunkiness to stratospheric levels are amusing when taken in extremely small doses. Thankfully, he's a lot better at brewing, and Dogfish Head's 90 Minute IPA is one our favorites, a great example of the East Coast style with rich, slightly sweet maltiness balancing plenty of smooth bitterness. Challenging from the West Coast is Bear Republic's Racer 5 IPA, brewed with whisper of malt that's no match for all its piney, grapefruity hoppy goodness. So who wins?

We both found the sweetness of the Dogfish Head IPA contrasted well with the tang of the cheddar cheese, and while the cheese also blended well with the beer's rich, smooth character. One the other hand, the intense hop character of the Racer 5 clashed against the cheddar's tanginess, the resulting conbination not working particularly well. The East Coast and bad rap prevails! 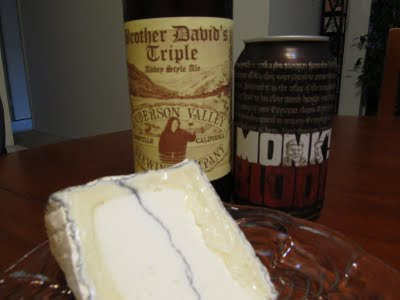 I suppose Humbolt County should be known for its towering redwoods, breath taking coastal vistas, and vibrant artisan community. But mostly, it's known as a place that grows some pretty good dope. So it seemed natural to pair cheese from this region with a beer from a place also known for good dope, Mendocino County, and a beer from where a lot of dope is consumed, San Francisco. And since fruity Belgian Ales are often recommended beers to pair with goat cheese, Brother David's Tripel from Anderson Valley Brewing and 21st Amendment's Monk's Blood figured to be good choices.

At first, I found the Brother David's Tripel to be the better pairing, as its aromatic crispness really seemed to intensify with the goat cheese. But while Linda preferred the Brother David's Triple over the Monk's Blood straight up as a beer, so found the Tripel overwhelming the cheese, while the fruitier Monk's Blood matched the cheese's intensity, and created the classic fruit and cheese combination. She declared the Monk's Blood to be the better pairing. And you know, after further consideration, my wife was right. Admitting that in writing can be dangerous.