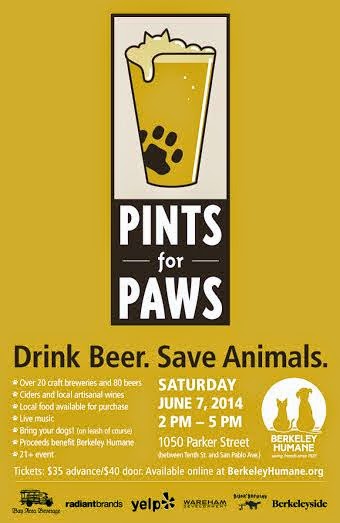 Most people aren't aware that few charity beer festivals operate this way.  Most pay a portion of their revenue to a professional organizer once all the expenses to run the festival are paid. An organizer usually takes 5-10% of the festival revenue, but sometimes the percentage can be as high as 35%.

Pints for Paws festival organizer Ashley Routson wanted to do  things differently.  Routson, also known as The Beer Wench, has been enthusiastically bouncing around the Bay Area brewing scene for many years in many roles and is currently the Director of Awesomeness for Bison Brewing.   She also owns a rescue dog and is passionate about the Humane Society's mission to provide care for homeless animals. Since every thousand dollars Berkeley Human raises allows them to save an additional homeless animal, she wanted to make sure the festival proceeds would save as many animals as possible rather than ending up in an organizer's pocket.

As Routson explains, "With this particular event, the charity is the only one touching the money. And Berkeley Humane is very transparent with how that money will be used. The math is simple, the message is simple. $1,000 = 1 animal life. Drink Beer. Save Animals."

So go to Pints for Paws this June 7th, enjoy some great beers, and be confident knowing all the proceeds are going directly to Berkeley Humane.

The details for  Pints for Paws

When:  Saturday, June 7th, 2:00-5:00 pm
Where:  1050 Parker Street, Berkeley, CA
Tickets:  $35 in advance, $40 at the door
For more information and to buy tickets, go to http://berkeleyhumane.org/pintsforpaws.
Facebook page:  http://facebook.com/pintsforpawsberkeley
Follow on Twitter:  http://twitter.com/pintsforpaws
at May 20, 2014