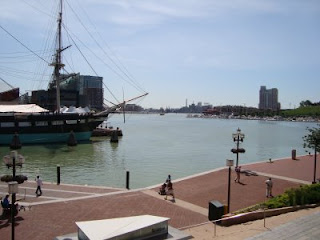 Baltimore is one of those cities that typically elicits shoulder shrugs. Nobody seems to really know or say much about the place. It's the weak East Coast sister to splashier Boston, New York, and Washington. Having been there before, I understand some of the ambivalence. But spending the past week at a trade show, and making a special effort to get to know the place, I've got to say, Baltimore doesn't get the respect it deserves.

One of the best ways to get to know a place is to run around in it, so Monday morning, I'm out the door of my downtown hotel room to go for a run. I'm part of the morning downtown hustle and bustle, dodging and weaving through pedestrians and cars, making my way down to Baltimore's Inner Harbor district, where I know clearer running paths await. I'm also planning to scout out Max's Taphouse in the Fell's Point neighborhood, which brags about having Maryland's largest beer selection, and has drawn raves from various online beer review sites.

I get down to the Inner Harbor and follow the running path eastward past an enormous building with towering smokestacks. This imposing building was once a power plant for the city, but now houses an ESPN Sports Zone, Barnes and Noble, and Hard Rock Cafe. Baltimore is a city that has come around to embrace its traditional brick and mortar, port city roots. While it may not be flashy, it gives Baltimore an unmistakable character. Working my way through the Little Italy neighborhood behind the former power plant, I finally make my way to the Fell's Point neighborhood, and find Max's Taphouse.

I stop, take a quick glance inside, and see plenty of taps. The menu lists some pretty basic brewpub fare, but I doubt many people go there for the food. Well, I've scouted out the place and know how to get there. So I finish up the run, set up for the trade show at the convention center in the afternoon, and then make the 40 minute walk from the hotel to Max's for dinner. 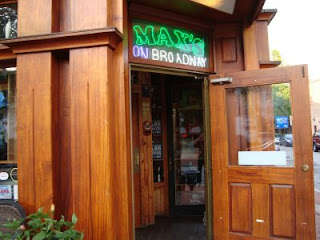 I cannot independently verify Max's claim of Maryland's largest beer selection. But after looking at a list of no less than 74 taps, and a bottle list that's really an eight page pamphlet, it's a good bet that no other place in Maryland, or in most other states, can top what Max's has to offer. I decide to start off with the Aecht Schlenkerla Helles, a German Smoked Helles.
Smoke is a very dangerous flavor because it gives such a great dimension to food and drink, but just a little too much smoke can easily destroy everything. The brewer's touch here is simply outstanding with such a light style. You can sense the smoke, but the brew remains light, refreshing, and nuanced.

Now on a smoked beer kick, I decide to give Victory Rauchbier Porter a try. I've been a fan of Victory Brewing, and always make a point to have their beer when I'm on the East Coast. Victory Hop Devil is one of my favorite IPA's, so have high expectations for the Rauchbier Porter. I'm not disappointed, as once again, the brewer's touch is excellent. The smoke really adds the right dimension to the rich roasted malty goodness going on here. Smoked porters go well with barbecue, so I order the pulled pork sandwich

I finish the smoked porter before the sandwich arrives. I could order another one to pair with the sandwich, but that would deprive me an opportunity to try something else, so order a pint of Smuttynose IPA. Not a great pairing with a pulled pork sandwich in my opinion, but Smuttynose is a brewery I've heard a lot of good things about. I also appreciate the East Coast style of maltier, more balanced IPA's, in contrast to the blitzing West Coast style, which hit you over the head with a bunch of hops. (Not that there's anything wrong with that.)

The Smuttynose IPA tap handle has a picture of two friendly old men sitting next to each other in rickety lawn chairs, apparently about to commence shooting the shit about something or rather over a beer. This IPA is like those old guys, just hanging out and in no hurry to go anywhere. It starts out welcoming, with a malty, a little fruity and slightly floral taste, and then the hops start picking up steam at a leisurely pace with a warm bitter goodness. I feel like pulling up a lawn chair and joining those guys. The pulled pork sandwich arrives as I work my way through the Smuttynose IPA. For a place where the food is an afterthought, this is a well done barbecue sandwich. Nice tangy sauce, and not too much spice so the pork flavor comes through.

Polishing off the sandwich, it is time for dessert. And yes, the right beer makes a great dessert. And it's hard to beat Southern Tier Mokah as a dessert beer. It's a sweet, creamy beer milk shake with plenty of rich and well blended chocolate and coffee flavors. I've had beers with coffee in them that taste like someone just dumped some strong, leftover coffee into the brewing vat, so really appreciate the skillful brewing here.

What else can I say? A great end to a great day of exploration through beer and running.
at June 06, 2009