Find balance and lost years at the SCORE Clinic 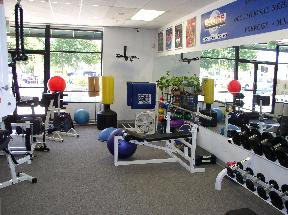 I walked into the SCORE Clinic knowing something was terribly wrong, but not quite sure what it was. My training regimen had degenerated into a cycle of a hard track workouts ending in injury, a two week recovery period, only to injure something else in the next hard workout. This is not training that leads to success in racing, and it was showing. The soles of my running shoes looked like someone whittled outside edges with a pocket-knife, a sure sign of supination. My left hip was noticeably at least an inch higher than my right one. For at least the least nine months, I'd been trying to push through chronic soreness in my upper left knee and soreness on the ball of my right foot, and was now starting to battle left hip strains on top of that.

With things get totally screwed up in an important area of life, and you don't have the foggiest idea what to do about, it's always good to consult a professional. And there's a certain irony to the fact that the SCORE Clinic is just a couple blocks away from my divorce lawyer. And once Dr. Omura of the SCORE Clinic simply watched me try to do a single squat, and he pretty much figured out what the problem was. I basically couldn't do even a single squat, and was rotating my left foot outward due to a weak left hip, and shifting most of my weight to my right foot to protect my weakened left knee and hip. Needless to say, a one-legged runner is at a considerable disadvantage, so Dr. O developed a plan to increase flexibility, get rid of the pain and soreness, and find balance in my running stride.

That all sounds wonderful, but Dr. O accomplished this with techniques a casual observer might think come from a CIA torture manual. A typical session started with electrodes attached to my ailing left knee, producing pulsing electrical current into the knee muscles, causing them to twitch and contract uncontrollably. Then, Dr. O scraped my knee with something like that looked like an enlarged butter knife to break down the adhesions and scar tissue. Then, he performed something called Active Release Therapy where he would apply strong pressure with his bare hands directly on the sore knee or hip with the muscle contracted, and would maintain this pressure as I extended the muscle, literally squeezing out the swelling and damage. The session concluded with a vertebrae popping chiropractic hip and back adjustment, allowing the hips and back to find their natural, optimal alignment.
But Dr. O did more than subject me to a number of teeth gritting situations. He patiently demonstrated some simple stretches and exercises to do at home to flush out soreness, increase flexibiliy, and build up weaknesses. I've seen physical therapists treat their patient's living tissue as if it were some inanimate car chassis, but Dr. O gave me the insight and understanding to know what my problems were, how to fix it myself, and how to prevent it from happening again. These sessions were quite possibly the best investments I've made in running. I've faced many injuries and set backs in my thirty years of running, but dealing with these lingering pains and frustrations over the months with no apparent progress at the advanced running age of 42, I was contemplating hanging up the racing flats for good.

Back when I was young, immature, and naive, I told myself the day I stopped running and racing was the day I died. Life has changed tremendously since then, but one thing that hasn't is the drive to keep running, and train for the next race. Like a lot of runners, running has been my rock. There simply must be some challenge to overcome or a goal to meet to keep me driven, and without this, I become very directionless. The lessons of discipline, persistence, and dealing with success and failure learned from running have guided me well in real life, where success and failure in things like family, career, personal fiances, and social relationships have consequences far more significant than whether or not you take home some cheap, plastic trophy. Running's gotten me through some hard times, when I could briefly escape life's turmoil and burn off frustrations just to get through the day. I simply wouldn't know how to give it up even if I wanted to. Thanks to the SCORE Clinic, I no longer have to make that difficult choice.
at November 21, 2009