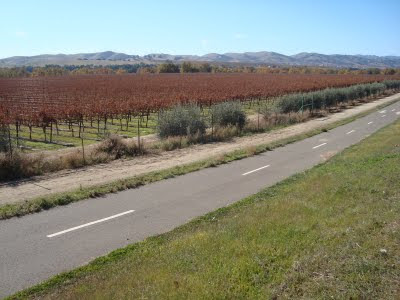 You know, wine cycling just doesn't seem to be my thing. First, I don't even own a bike. Second, wine is fine, but only so much variety can be achieved with different grapes and growing conditions. Exploring the world of beer, whether brewed by devout monks or hippie homebrewers encompasses a wide spectrum of tastes, like peppery Saisons, sour Belgian Ales, bitter IPA's, and sweet stouts, just to name four of the dozens of beer styles. I try to explore this world every chance I get, so peddling around on a bike, sipping wine, was not necessary my idea of the best way to spend a day.

But since the best thing that ever happened to me was meeting a wine-loving cyclist, I've come to realize making certain compromises are in my best interest. So on one fine November day, my girlfriend Linda talked me into spending one of our days off to go wine cycling in the Livermore Wine Country.

Livermore's wine country has plenty of mixed use trails and roads with wide bike lanes, making it an ideal wine region for cycling around in. Linda and I have been to both the Livermore and Napa Valley wine regions a few times, and have come to realize the biggest difference between the wine regions is comparable wines from Livermore are about twenty dollars less per bottle.

I might also add that Napa Valley resembles a foodie amusement park, complete the big crowds and waiting lines, but without the fun, simple foods like funnel cakes or cotton candy. Well, there is cotton candy, but it's actually a bite-sized appetizer of a mousse of salmon, lamb liver, and sea urchin made to look like miniature cotton candy, which the chef hopes will evoke a pleasant childhood memory to distract you from how much he's charging for it. Just give us the wide open, unpretentious spaces of the Livermore Valley, where one can tool around on its many scenic bike trails, sample some great wine, purchase some of it, and still have some beer money left in your pocket. 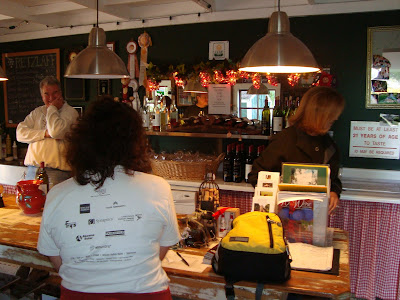 Our trip covered 15-20 miles and included stops at Wente Vineyards, Retzlaff Vineyards, Steven Kent Winery, and Tamas Estates, and they all served up some excellent wines to taste. We also rolled through Sycamore Groves/Veterans and Holdener Parks, and it was easy to plan for the trip using this handy map the helpful folks at Livermore Cyclery provided, where I rented my bike to ride with Linda.

The highlight was at Retzlaff, which uses organically grown grapes grown on its estate for virtually all of their wines. On a slow weekday, we spent plenty of time with Gary and Connie, the married couple running Ratzlaff's informal and rustic tasting room. After chatting away about the wine and various past and present happenings around Livermore's wine country for close to an hour, and with it getting near their 2pm closing time, Connie took us back into the storage barn full of barrels of various vintages aging away to give us some samples straight from the barrels. She removed the plug from their 2008 Merlot, and gave us a taste of this full bodied merlot. Then she extracted some of Retzlaff's 2008 light fruity Cabernet. Both wines were a little young, but worked pretty well on their own. Once we had sipped about half of the Cabernet, she took our glasses back and added some of the 2008 Merlot back into them, put her hand on top of the glass, and vigorously shook the wine with her hand to mix and aerate it, grimacing like a gleeful mad scientist as she did this. The resulting blend's arousing depth and complexity surpassed what either the Merlot grapes or the Cabernet grapes could possibly muster on their own. I suppose this shouldn't be surprising, but it's a bit dramatic to see the taste of the final wine blend being far greater than the sum of its parts. And Connie seeming to enjoy this a little too much added to the drama.

So if you must drink wine, and can get to a wine growing region of the country with bike friendly trails, I grudgingly recommend wine cycling. Even if I really enjoyed it, you don't think I would admit it, do you?