The Session #34: Recovering from Family Stumbles at the Sonoma Chicken Coup

The month's Session, "Stumbling Home" by Two Parts Rye, we're asked to write about our experiences at a brew pub or bar within a short distance from our homes.

Learning something the hard way is the often best way to really understand it. Unfortunately, I've learned the hard way that families are fragile things. I went through a divorce five years ago, and now see my six-year daughter Verona and eight-year old son Brandon only about 20% of the time. During these moments, I do what I can to put a few of the pieces of a broken family back together. And while families are often torn apart by unforeseen events and complex psychological forces hardly anyone really understands, it is often the simple things that keep families together. And for this reason, I value the weekends walks my girlfriend Linda and I take with Brandon and Verona to Almaden Lake Park, before we all go to lunch at the Sonoma Chicken Coop. The Sonoma Chicken Coop seems to be best described casual restaurant that brews its own beers than simply a brewpub, and we started frequenting one of its locations near the southwestern edge of the Almaden Lake Park over the past year. 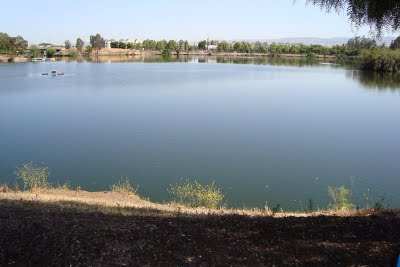 This journey involves a few rituals. Once we walk out the front door, Verona starts keeping a meticulous running tally of dead snails she finds on the side walks of our condominium complex, proudly announcing "There's another one!" soon as she make yet another of these important finds. Brandon will sometimes say, "Tag, you're it!" and run away for a few yards in hopes that we'll chase him, and sometimes we do. After covering making our about 400 yards to the park entrance, we follow the bike trail running along its eastern edge. When we get to the "balance beam", actually a small barrier fence built out of old telephone pole, the kids will always takes their turns walking down it, refusing to go any further until this is completed. Verona always goes turn first, and then Brandon quietly follows.

We take the bridge over Los Alamitos Creek, which feeds into Almaden Lake in the center of the park, and work our way along the trail along the western edge of the lake until we reach the playground at the park's Northwest corner. It sometimes takes Verona as long as five seconds to meet a new friend once she gets to the playground. She also enjoys testing her climbing skills on the rope jungle gym, and or playing pirate on one of the playground structures designed to look like a ship. 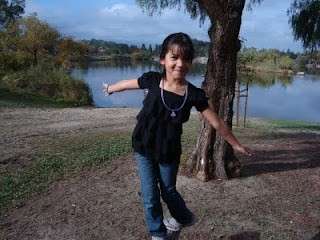 I know Verona enjoys these times, because we about them, and she tells me about the friends she makes. When Brandon hears we're going to the playground and Sonoma Chicken Coop, he'll smile and sometimes bang his wrists together rapidly in excitement, so I know he's excited about going, but otherwise, he hardly talks to me going to the playground besides a simple "yes playground" or "yes Sonoma Chicken Coop". Brandon hardly talks about anything to anyone. You see, Brandon has autism. 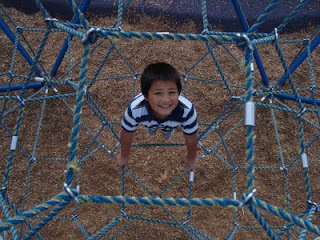 Autism is a psychological condition which makes it very difficult for Brandon to organize sensory inputs, and restricted his social and language skills. There is actually a broad spectrum of autistic behaviors, from children who may spend all day silently rocking back and forth, to the high functioning people with Asperger's Syndrome, who may be highly successful in society despite odd, somewhat anti-social and eccentric behaviors. Brandon's pretty much smack dab in the middle of the autistic spectrum of behaviors. The best estimates are that 1 in 150 children are born with autism, so there's a reasonably good chance someone you know is has a family member with autism.

When I first took Brandon to this playground two years ago, he would aimlessly walk around the edges of it, muttering quiet gibberish, often banging his wrists together. Sometimes when highly overstimulated, he would slam his chin with the top of his right wrist over and over again with enough force to producing an audible thud-thud-thud, a slightly mutilating self-stimulating behavior. (When this happens, we divert Brandon to a less dangerous self-stimulating behavior by asking him to "clap hands", which he obediently follows.) After maybe ten or twenty minutes of this, he would develop a comfort level to the sensory overload that a playground full of children would creates, and could be prompted to go over to the swing or go down the slide. On the swing, I would push him a few times on the swing and then stop. As gravity brought Brandon to a stop, we would ask, "Do you want a push, yes or no?" If he said "yes", he got a push. Later, once his language skills improves, we'd require him to use longer sentences like "More swinging" or "Can you push me, please?" in order to get us to give him the desired pushes on the swing. Inducing to use language in this manner involves principles of Applied Behavior Analysis (ABA), and Brandon has responded quite well to this type of therapy, which has proven to very successful helping many overcome their autistic silence.

Brandon's ABA therapists have worked with him to act more appropriately at play, and he now needs little or no prompting to play on the playground equipment on his own, simply blending in with all the other kids. It is a quiet, reassuring small victory when for a just a few moments, we're no longer battling Brandon's autism and he's simply acting like a normal kid. Verona tells me she hopes Brandon will talk normally when he's ten. Verona is arguably Brandon's best therapist, as she understands him well, and has picked up many speech therapy and ABA strategies and uses them often with Brandon. Linda, who is a professional speech therapist, has been great using her professional training and experience to help Brandon develop his language skills.

Once the kids have worn themselves out on the playground, we all head over to the Sonoma Chicken Coop. Many brew pubs have children's menus, which is reassuring for the future of craft beer. I cannot think of a better way to encourage the next generation to "respect beer" or "support their local brewer" than giving them as many opportunities as possible to watch their parents do just that. Linda and I enjoy the Sonoma Chicken Coop's Kolsch, which is light and refreshing and has a bit of a lemon-pepper zip to it. Their IPA is more balanced than most brewed in Northern California, and has sharp grassy bitterness to it. And they've recently released a Scotch Ale, which has a light smokey flavor and in their with all the caramel malt. The beers are nothing to rave about, but they're solid.

But going to the Sonoma Chicken Coop isn't about the beer. It's about Linda and I enjoying a beer while Verona tells us all about her new friends at school and boasting "I know minuses!". It's about Brandon no longer meekly saying "ketchup" when he wants us to pass him the ketchup for his fries, but know spontaneously asking "Do you have ketchup, please?" when there's no ketchup on the table. These are moments that at one point in my life, I could have totally lost. Knowing too well how families fall apart, I realize it's these times that keep us together. 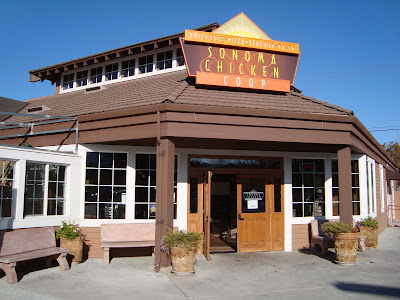