The Session #39 Collaborations: To Brew Good Beer Requires Some Heat

For this month's Session, Mario Rubio of Hop Press asks us to write about beer collaborations.

High school and college sports teach a lot about collaborations at an early age, where success or failure has few consequences compared to things like family or careers experienced later in life. In my senior year of high school, my cross-country team bickered and argued constantly. Virtually every team decision you can think of divided the team into angry factions. At the end of the season, when it was time to shut up and run the big races, we ran out of our heads and qualified for the high school state championships, despite not being one of the favorites to advance. And a week and several clashes later, we finished significantly higher at the state championships than we were ranked. Twenty-five years later, being part of this bickering, overachieving team remains one of my most successful collaborations.

Four years later as a senior in college, our cross-country team was so chummy and got along so well no matter what, you'd think we were the College Glee Club instead of a bunch of fired up runners. And when it came time to qualify for the national championships, we ran such a flat and uninspired performance that the Glee Club probably would have beaten us.

Passionate, strong willed people with distinctive talents create tension whenever they join forces. Shaped by my cross-country experiences, when I notice a distinct lack of tension in a group working together for a common goal, I start to get a little suspicious. Of course, conflict can lead to bad things, so how this tension is dealt with and resolved is often key to the success of any collaboration.

And so when I started homebrewing with Eric, a long time friend of mine, I wasn't that concerned when I found we had rather different approaches of how to brew beer. Eric takes very meticulous notes and is very traditional in his methods and preferences, where I tend to rely more on intuition and experimentation. Eric is the far more experienced homebrewer, and his beers having won awards, but it had been eight years since he brewed his last beer, and he was looking to get back into homebrewing. Having made only four batches myself, I was a little intimidated working with someone with far more experience.

Coming up with a recipe with Eric involved a few awkward moments. I was in the mood to make a light, clear, aromatic Amber Ale with honey. My first homebrew was an Amber Ale, and I enjoyed how the Galena and Wilamette hops produced an aromatic quality to the beer. I figured adding honey to that would add a fresh, clear character on top of that, while adding additional complimentary aromatics. A rich, organic buckwheat honey at a local farmer's market I found seemed ideal. Eric was very cautious to the idea of adding honey, concerned that wild yeasts and commercial additives found in honey could ruin the beer.

Eric researched brewing with honey, and found several good sources recommending heating the honey for 2 hours at 170 degrees Fahrenheit to kill off all the wild yeasts. I was concerned that this prolonged heating would drive off too many of the aromatics I was hoping to inject into the beer, and showed Eric the book Randy Mosher's Radical Brewing, which claims heating the honey for 20-30 minutes at 170 degrees Fahrenheit is enough to kill off all the wild yeast. We comprised by heating the pound of buckwheat honey for at one hour at 170 F and added it to the carboy four days after the initial pitching of the yeast, after the initial fermentation had largely died down.

Eric also suggested we go little different direction than an light amber ale. I was planning to use only a pound of crystal malt in the brew, but Eric wanted a more layered malt character to the beer, suggesting we add 6 ounces of biscuit and carapils malts, and a single ounce of chocolate malt in addition to the crystal malt into the recipe. Biscuit malt sounded pretty good to me, and biscuits and honey is a great combination, so I suggested we go for a pound of it in our five gallon batch rather than the 6 ounces he originally suggested, which he enthusiastically agreed to.

The final recipe was not what either of us had in mind at the start, and was largely a product of a compromises. And since a bunch of compromises often satisfies no one, we could have easily ended up creating a muddled, directionless tasting beer. But we think we've knocked this one out of the park! It's still bottle conditioning so we haven't tasted the final result, but sampling the beer as it went in bottles, the layering of malt components gives it a nice malty complexity and we can taste the buckwheat honey giving it a nice background note. There's a smooth, yet strong hop bitterness that is perhaps too assertive, but it should continue to mellow a bit over time. The ale has a lively, complex yet drinkable character that should carry through after the bottle conditioning is complete.

But the quality of the beer is really secondary. From our collaboration, Eric found a way to return to homebrewing, and gave me a top flight homebrew education in the process. Two friends who kept telling each other they should see each other more often finally did that. 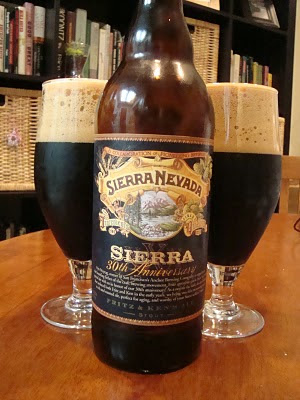 Once Eric and I racked and bottled our share of our efforts, we split a bottle of Sierra Nevada and Anchor Brewing collaborative Imperial Stout . I couldn't help wondering what happened as this beer was created. It's hard to image Ken Grossman and Fritz Maytag arguing in front of the brew kettle, but it's a little hard to believe two passionate, independent, and strong willed individuals didn't have a few differences to work out when they brewed this. It's a great, creamy complex Imperial Stout with a strong bitter chocolate character with a little smokey and nutty undertones. Was this a result of Grossman's and Maytag's combined brewing vision, or simply a product of compromises?

At that point, Eric and I really didn't care about that. We just enjoyed their final result.
at May 07, 2010

Email ThisBlogThis!Share to TwitterShare to FacebookShare to Pinterest
Labels: homebrewing, The Session