Beer of the Month: Evil Cousin by Heretic Brewing 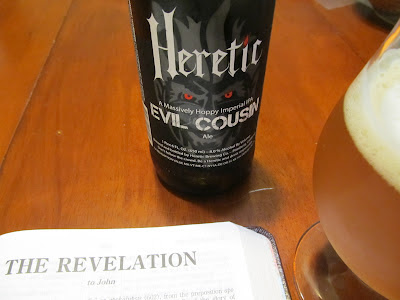 Jamil Zainasheff is well known in home brewing circles for his shows on the Brewing Network, and his books on brewing.  And while it appears he never advocated any theological views challenging an existing religious orthodoxy, nor was banished from any church for his teachings on home brewing, he none the less decided to call his new brewery Heretic Brewing.

My favorite of Heretic's initial releases is Evil Cousin, an Imperial IPA.  And while you could make a solid argument the Bay Area needs another Imperial IPA like most people need a hole in their heads, I happened to enjoy this new one for its sheer over the top hop enthusiasm.

There's a little sweetness to this brew, but otherwise the malt has no further contributions to the flavor which I suspect is exactly the idea.   It rates 100 ibu's and you can taste every one of them, but has this nice pineapple, tropical fruit vibe to the sticky bitterness.  It's one of the most imbalanced Imperial IPA's out there, which is meant as a compliment.

If hop overload isn't your thing, I recommend you try Heretic's Evil Twin, a more maltier Imperial Red Ale I also liked.  Either beer is great way to celebrate nailing 95 theses to a church door.