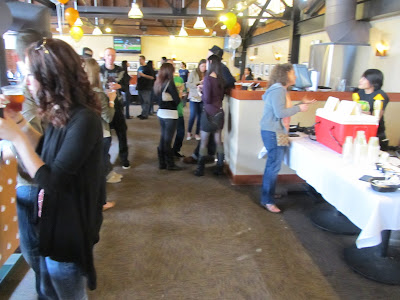 Last Saturday, Pyramid Brewing teamed up with Ales for Autism to highlight some of their new releases and reoccurring seasonals to help raise money to support families struggling to raise children on the autistic spectrum.  The concept was simple.  For a mere 20 bucks, all of it going to Ales for Autism, you got to enter a loft space in Pyramid's Brewpub where they had a bunch of their new beers on tap, each paired with an hors d'oeuvre or dessert item.  So you just go around and taste all the new beers, and snack on the pairings, until you're done.  (To check out the full details, go here.)

My wife and I found it to be one of those low key casual events, highly underrated if you ask us, where it's easy to strike up a conversation with the strangers sitting next to us, and the beers can be enjoyed and savored without loud interference from the crowd.  So what's new from Pyramid?  Plenty judging for the event.  Here were our favorites:

Wheaten IPA The controversial beer of the afternoon.  Wheat IPA's are an up and coming style, but I have to admit I just don't get these beers.  They taste like over-hopped wheat beers, and I find the underlying wheat tartness clashes with the hops.  For what it's worth, I found this to be one of the better ones.  Linda, a much bigger hop-head than I, really enjoyed all hop aromas and really liked how the wheat malt gave this IPA an extra dimension.

And while it wasn't poured at this event, you should check out Pyramid's Thunderhead IPA, a very drinkable and balanced IPA, that celebrates the hops without hitting you over the head with them.


Uproar Imperial Red Our favorite of the afternoon, full of lots of roasty flavors with a nice herbal, earthly hop finish.  Very smooth and drinkable for an Imperial Red.

Pyramid stepped up to the plate to help support families raising children with autism, with Ales for Autism raising $2,400 from the event.   As the father of an autistic child, that means I'm going to buy more Pyramid beer, and hope you will too.