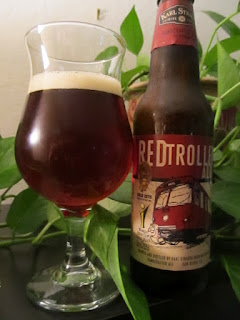 Our Beer of the Month hails from Karl Strauss, which has been a part of the vibrant San Diego brewing scene since 1989 and operates a number of brewpubs in Southern California.  I've enjoyed Karl Strauss's Red Trolley Ale on trips I've made to San Diego and now I can find it in the Bay Area, since Karl Strauss has recently expanded its distribution into Northern California this summer.

“We’ve had fans asking for our beers up in Nor Cal for a long time,” says Paul Segura, Karl Strauss Brewmaster in a press release announcing this summer's expansion into the Northern California market.  “We wanted to wait until we had all of the pieces in place—the new bottling line, keg machine, and additional capacity—before we made the move into Northern California.  Quality is paramount and we want to make sure we do this right.”

And how has Northern California taken to this San Diego interloper?   "Our Nor Cal expansion is exceeding our expectations," exuded Melody Daversa, Certified Cicerone and Karl Strauss's Marketing Manager in response to my e-mail.   "We have received such good feedback from the entire Bay Area and we've sent up three times as much beer as we originally forecasted."

As for any hopes that we might see a Karl Strauss Brewpub in Northern California soon, I'm afraid Melody largely dashed those hopes when I inquired about that. "At this time, we don't have a Northern California Brewery Restaurant in the plans, but you never know!"   Oh well.

As for Red Trolley Ale, this malt forward, complex red all is one of my favorites.   It's a little toasty, with sweet caramel and toffee flavors plus a fruity character I can't quite put a finger on (is it dried apricot?) with a restrained, barely noticeable earthy hop finish.  Red Trolley Ale won a gold medal at the 2012 World Beer Cup and a whole bunch of other medals in beer competitions over the past few years.