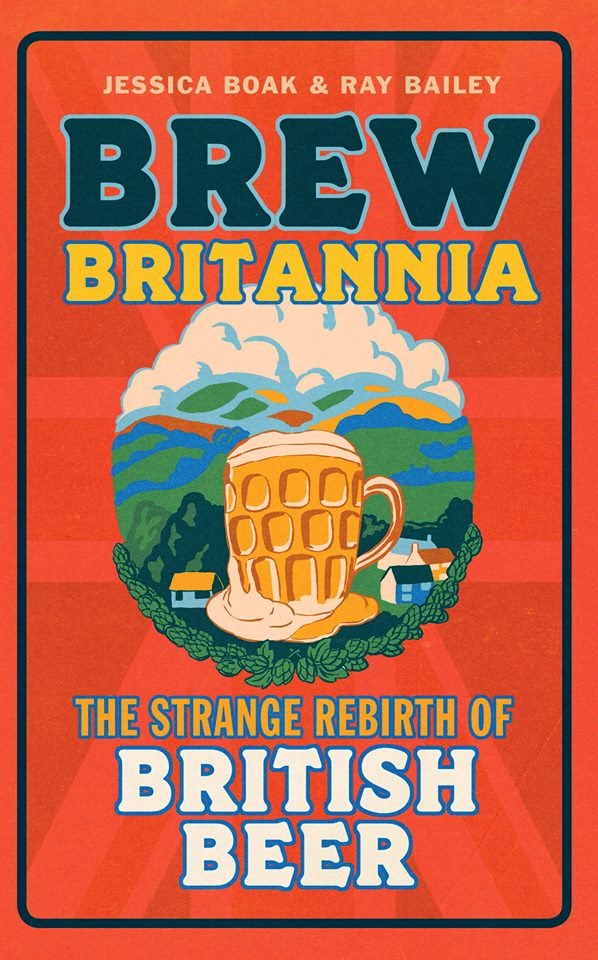 It may seem a little pointless to post my high recommendation of Brew Britannia!, the history of British beer's rebirth written by Jessica Boak and Ray Bailey.  After all, since people on both sides of the pond like Zak Avery, Alan McLeod, Stan Hieronymus and Pete Brown have already weighed in with their enthusiastic thumbs' up, what's really left really for me to say?

These beer writers are pretty knowledgeable about British brewing.  I, on the other hand, only had this foggy notion about some weird group of British beer enthusiasts called CAMRA, which sounded like something straight out of a Monty Python skit.  So I eagerly read Brew Britannia! hoping to learn beer's transformation in Britain given I was pretty well versed in America's brewing revolution.  Boak and Bailey's book presents a fascinating British contrast to what happened in America.

As many already pointed out, Boak and Bailey couple impressively thorough research with a conversation-like writing style, focusing on the personalities that drove the British beer revolution to create an engaging story. Beer histories tend to be fairly wonkish, delving deeply into brewing styles,  beer ingredients and brewery equipment.  Boak and Bailey thankfully go in the opposite direction, focusing on the personalities and motivations of the various individuals who made British beer what it is today while rarely discussing the beer itself all that deeply.  Given the book give a very linear history of British beer starting from 1960's, this was a wise choice, preventing it from turning into a tedious "bus schedule" of British beer minutia.  What I found especially fascinating about Brew Britannia! was comparing Britain's beer revolution to what occurred at approximately the same time in the United States.

American brewing pioneers such as Fritz Maytag, Ken Grossman, and Jim Koch were undeniably passionate about beer and took great personal risks to follow those passions to create Anchor Brewing, Sierra Nevada, and Boston Beer respectively.   However, it is equally undeniable they were all also shrewd and highly ambitious businessmen who worked long hours to build their eventual empires. The craft brewing revolution in the United States was in many ways, entrepreneurial capitalism at its finest, where a few smart and hard working individuals took calculated risks the market would pay extra for a different product and turned out to be right as individual consumers started buying it.

Boak and Bailey's history documents a revolution with a similar outcome, but a demand driven one rather than the American revolution driven by new supply.  Various consumer groups emerged in the 1960's, most notably CAMRA, which not only were seeking better beer in opposing the Big Six British corporations, but were undeniably social and arguably political organizations.  Their fight was ultimately a lot more than simply demanding traditional live cask ales in favor of forced carbonated kegs of fizzy the Big Six brewers favored. It also centered on the traditional role of the British pub and a revolt against large corporations that were perceived as poor stewards of British tradition and identity.  While there was certainly dissatisfaction in the United States at the sorry state of beer in the 1960's and 1970's, there weren't any organized consumer groups in United States seeking change in our nation's beer.  That whole idea seems somehow un-American.

The early British craft brewers emerging in the 70's and 80's come across as reluctant businessmen, simply trying to brew a few barrels of decent brew without the more ambitious goals of the America's initial craft brewers. And yes, Boak and Bailey portray CAMRA as both goofy and dogmatic, prone to infighting over virtual any trivial topic they could possibly fight over, confirming my suspicions about the organization all along.

Boak and Bailey's story of Britain's craft brewing revolution seems, well very British.   Which raises the question, does each nation's brewing transformation uniquely capture it's national identity?  Are Sweden's and Italy's craft brewing revolutions distinctly Swedish and Italian?  Are Beer Bolshevik's fermenting revolt among Russia's proletariat as China engages on a Long March against lager imperialists led by a beery Mao Zedong?  Upon finishing Brew Britianna, these questions no longer seem as absurd.