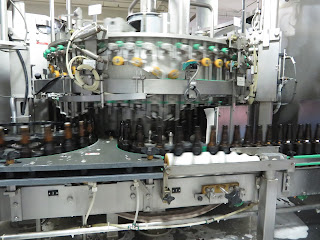 Cheri Chastain, Sierra Nevada's Sustainability Manager looked into this question and the answers are not encouraging. "There's two big hurdles for this happening in the United States," she explains. "The first is about geography. There’s over 3,000 breweries scattered over a vast area, many of them distributing over several hundreds or thousands of miles.  To collect all those bottles and ship them back to their respective brewery would take so many resources it wouldn’t make sense."

Of course, if every brewery used the same bottle, this geographical issue could be overcome. According to Chastain, that's unlikely to happen since most breweries have propriety bottles. "Many breweries have a proprietary mold. Breweries like Red Stripe have a distinctive bottle that's proprietary. Sierra Nevada has a proprietary bottle. Other bottles have brewery logos etched or molded into the bottle. Considering how competitive the industry is, it's unlikely many breweries will agree to give up their proprietary bottles and move to a interchangeable one."

It's looking pretty unlikely reusable bottles, once widespread in the United States, will make a comeback.