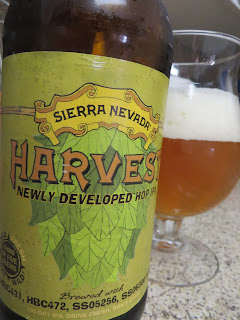 One again, it's time to ramble on various beers I've had lately.

First up, none other than the 3rd batch of Sierra Nevada's Hop Harvest Series made with newly developed hops. In fact, they're so new, they're only known by the numbers 472, 05256, 431, and 06300. Hopefully someone will give these hops some sexy names, as they coalesce to create unique pear-like flavors, with some melon and pine for good measure. It's a wonderfully soft tasting IPA, which like others in this series, redefine what can be accomplished with hops.

This next review presents a serious challenge to maintaining my beer karma. It's Lucky Buddha, a beer from China (*) sold in cool looking green bottles shaped like the laughing Buddha. Only recently could you find this beer in the United States. The nice Lucky Buddha PR person offered me a sample for review and I said "yes". Without going into a long story, this remarkable persistent and determined PR person finally got a six-pack of Lucky Buddha delivered after weeks of effort and when anyone works that hard to get me some free beer, it would seriously damage my beer karma to say anything bad about the beer she represents. 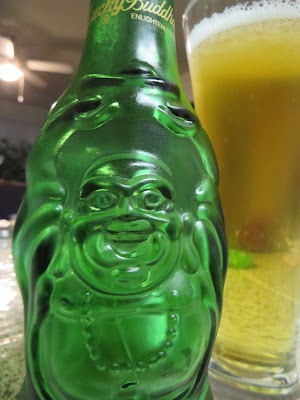 But of course dear reader, it's also bad beer karma to going around saying great things about a beer just because someone gave me a free six-pack, hence the dilemma. Now it's a pretty safe bet the small segment of beer geekdom that reads this blog is probably not breathlessly awaiting the next lager from China sold in green bottles. And no, my expectations were not the greatest either. However, both my wife and I liked Lucky Buddha on it's own terms. Sneer all you want at the rice adjuncts, they gave the beer a clear freshness in between the initial light striked skunkiness and a slightly muddled grassy hop note at the finish. It's not one of those "nothing" lagers totally devoid of flavors, there's actually something going on in this brew. It's an easy drinking beer if I say so myself and works well with Asian food. OK, beer karma remains intact.

Finally, when it comes to beer karma, you can't go wrong drinking a beer that combats human trafficking. It's Calf-iene from Half Moon Bay Brewing, sales of which supports Not For Sale a charity fighting human trafficking. Calf-iene is a coffee, milk stout, that tastes like coffee and milk in a stout. Yes, that's the brilliant culinary commentary you've come to know and love from this blog. Seriously, the flavors really come together nicely, with a light sweetness and low level of carbonation. It's a little grainy going down with just a faint whisper of hops that stays out of the way of those wonderful roasty, creamy flavors. Packs a lot of flavors for just 6.3% abv. Just a really nifty sipping beer. 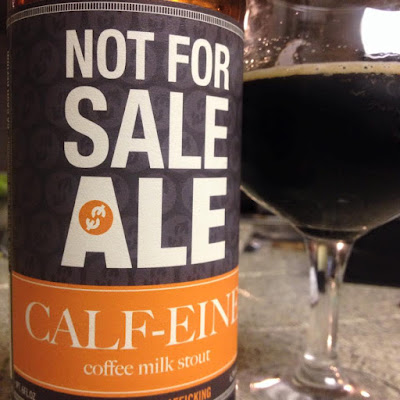