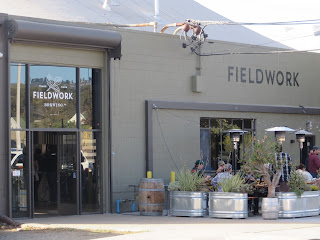 Having enjoyed the two brews from Berkeley's Fieldwork Brewing I could get my hands on in the South Bay over the past year, I decided it was high time to check out the place one Sunday afternoon with no particular place to go. Fieldwork is one of those neighborhood hang-outs you wish was in your own neighborhood. The place has no TV's so conservation fills the air. Despite being pretty crowded, it was surprisingly easy to find a seat to do some reading and work through a taster flight.

Wow. What more to say about the Fieldwork beer I sampled? They're innovative, but in a effortlessly innovative "why wasn't everyone doing this before" kind of way, rather than a forced, contrived effort where you can practically hear the brewer screaming in the background "LOOK HOW FREAKIN' INNOVATIVE I AM!" The "Citraweisse" was a study of Asian style balance, the light ale's sour yin balancing a nuanced Citra-hopped bitter yang. The "Sour Diesel" was mighty sour with a citrus and dank hop undertones, if one cared to notice this subtle action playing out under the sour dominance.  I tried an IPA called Sea Farmer made with sea salt and grapefruit. Reading the description, I figured I'd either love it or hate it. The briny grapefruit melding with the underlying hop flavors created an absolutely wonderful, flavorful tropical brew. I also thoroughly enjoyed my sample of Coconut Milk Double IPA, the coconut flavors just poking through the fruity hoppy flavors to create another excellent tropical-esque brew. 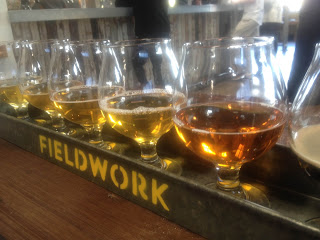 Sorry, no highly detailed tasting notes, as if you were expecting some detailed culinary breakdown from your truly, who recently described a coffee milk stout as "tastes like coffee and milk poured into a stout."  I was just whiling away the afternoon, reading a few pages out of my book and losing myself in a few excellent brews. I'll say this about Fieldwork, all six beers I sampled displayed a tremendous command of the ingredients and the brewing process. Take six random beers from some of the greatest breweries I highly respect and there's liable to be some slight off-note somewhere, or some place where the flavors just don't quite come together. It happens, even to the best of them. Not a thing seemed out of place with anything I tried at Fieldwork.

I'll add that Fieldwork strives for flavor in their IPA's instead of the usual alpha-acid assault so many brewers resort to. While I'm all for a hoppy punch in the mouth now and then, all the Fieldwork IPA's I tried showed an impressive flavor range achieved with hops that would impress the most jaded hop-geek, while being totally accessible to those who normally reach for something like BlueMoon. The brews really are that uniquely universal. 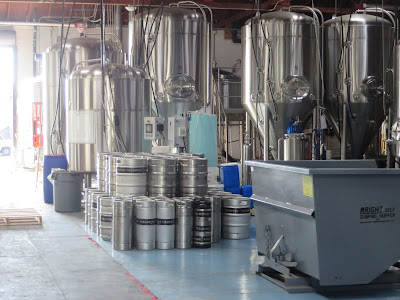 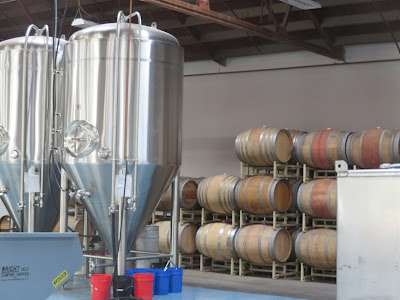 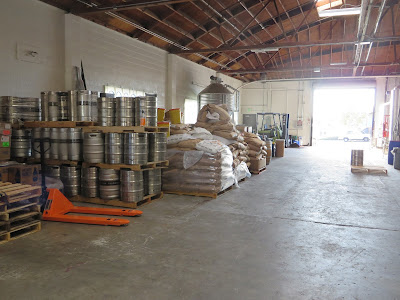