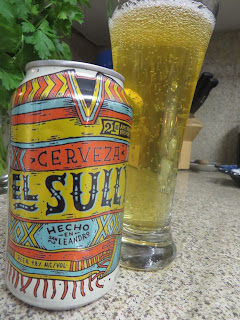 Time once again to ramble on a few new beers that crossed my path.  Here in the dead of a San Jose "winter", these new brews are decided on the lighter side.

Such as El Sully, described as a Mexican-style lager from 21st Amendment. Presumably named after 21st Amendment Brewmaster Shaun O'Sullivan, it's a damn good lager. New I realize most of you are probably not breathlessly awaiting the next new lager, but if you ask me, the simplicity of a well executed lager is a thing of beauty.  El Sully's decent malt heft, effervescent crispness with a light grassy hop bite is sometimes exactly what's needed in a beer, nothing more, nothing less. It's not a flavor explosion, but give me a basket of chips, a good salsa and a pint of El Sully and I'd be pretty happy. 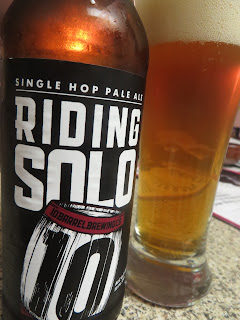 Next up, Riding Solo Pale Ale from 10 Barrel Brewing, a single hop beer made with Comet hops which 10 Barrel sent me to sample. Riding Solo is the brain child of "Benny" who, according to a 10 Barrel press release "was on the fast track working for a large brewery, and then it all came crashing down. He made a bad choice, climbed the wrong building in Bend and found himself in the clink without a job."  Hmmmm...am I the only one finding the "large brewery" word choice rather ironic given 10 Barrel is part of A-B InBev's global beer empire? At any rate, we'll assume Benny paid his debt to society and is working hard to turn his life around. If he comes up with more beers like this, it won't take him too long. I enjoyed the unique flavor of this Pale Ale, with a subdued bitter grapefruit peel character with a herbal character similar to mint. It's one nice little Pale Ale.

Finally, we come to Otra Vez, a Gose with prickly pear cactus and grapefruit, released with much fanfare from Sierra Nevada. The Gose has emerged from near extinction to become the fastest growing craft beer style and this addition to Sierra Nevada's year 'round line-up has cemented the Gose's status status in the craft beer industry. Having enjoyed many a recent Gose, when I saw a six-pack of this in my local bottle shop, I snapped it up. Unfortunately, it left me wishing Sierra Nevada just brewed a regular old Gose without dumping a bunch of exotic fruit into it and dialing back the sourness. A more traditional Gose is a study of yin-yang balance between the interplay of salt and sour in a light wheat ale. Otra Vez is basically a light fruit ale with a little salt and nary any sourness. It's reasonably enjoyable but comes across as a missed opportunity, the fruit becoming a distraction rather than an enhancement of the Gose style. I'll even go so far as to say if there was ever such a thing as a mass market Gose, a profit driven modification of the style to better conform to more general tastes, it would taste something like this. Sorry, Otra Vez just isn't my idea of a Gose and I just wasn't turned on with what really was just a light fruity ale. 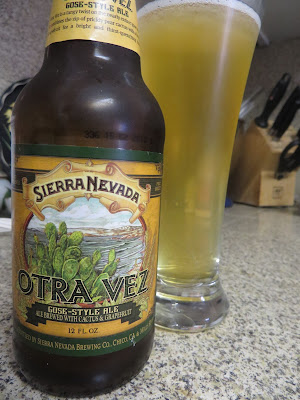