The Session #116: What happened to the Gose?

When I first discovered the Gose style three years ago, its sour/salty yin-yang balance was a refreshing antidote to the glut of so many IPAs. I knocked back quite a few Anderson Valley's  "The Kimmie, The Yink, & the Holy Gose" and also became a pretty big fan of the slightly soapy tasting Golden Gate Gose from Almanac Beer. From near extinction in the last century, this quirky sour, salty wheat beer brewed often spiced with coriander, traditionally brewed in and around the German city of Leipzig quickly became an unexpected American brewing success story.

But then, American brewers started doing what they do, fiddling around with other country's styles. Anderson Valley added blood orange to their Gose.  "It gives the beer a cool name!", enthused Anderson Valley Brewmaster Fal Allen when I interviewed him about it. Sure enough, blood orange gives Anderson Valley's Gose an extra dimension, but I'm not sure it was needed or improves upon the original version.  Anderson Valley tried a number of other spice and fruit additions to their Gose. They rejected tamerind, as sour on sour is just too much sour, but in the past year released Briny Melon Gose. I can't say I'm a fan of it. There's not much sour, there's not much salt, with the slightest hint of melon. It's basically a very light fruit wheat beer.

Sierra Nevada made a big splash this year adding Otra Vez Gose to their year around line-up. Sierra Nevada takes the sour salty mix and adds cactus and then grapefruit, and I taste.....confusion.

Recently, I was talking to Calicraft's Blaine Landberg about his Citra Gose, brewed with significant and highly untraditional Citra hop additions. Landberg explained his thought process this way: "I asked myself “How do you make a great Margarita?” rather than “How do you make a great Gose?"" As much as I'm a fan of most of Calicraft's beers, I wish Landberg had simply tried to brew a Gose rather than a Margarita. The Citra hops just clash with everything else in his version. 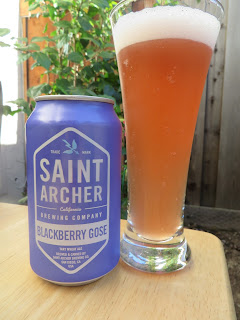 Now Saint Archer released a Blackberry Gose which I wanted to hate, but couldn't. Saint Archer always seemed more like a marketing construct than an actual brewery, with their acquisition by MillerCoors not particularly surprising. This unfortunately overshadows the fact that Saint Archer makes some first rate brews. Their Blackberry Gose is one of them, the tartness of the blackberry effortlessly harmonizing with the underlying Gose.

I could go on, but I think you're getting the idea. Breweries used to brew light wheat beers with fruit additions, often as "gateway" beers for those more comfortable with mass market lagers.  Now, they seem to be brewing the same beers with a whisper of salt, some sourness, a pinch of coriander and viola', a tired wheat fruit beer becomes a hip and happening Gose. Instead of embracing the sour-salty balance of the Gose, brewing seem to be running away from it. Dead German brewmasters have every right to be spinning in their graves.

Is it too much to ask for breweries to make a good Gose and stop right there?

Email ThisBlogThis!Share to TwitterShare to FacebookShare to Pinterest
Labels: Gose, The Session