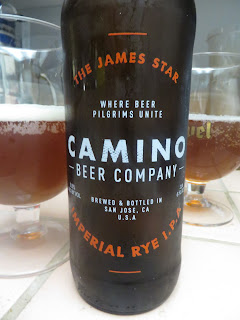 As we wrap up 2016, I've got one last rambling on three beers to close out this extraordinary year.

Let's start with a newcomer to San Jose's beer scene, Camino Beer Company and their Imperial Rye IPA they call "The James Starr".  It's the most malt forward Imperial IPA I can remember, and that's not a bad thing. The malt flavors really sing here, dominated by toffee and accented with a peppery spiciness from the rye. The hops are there, just barely. There's a little tea-like character on the finish, and if you concentrate hard, you'll detect a little pine and citrus. Few California breweries would brew an Imperial IPA this way, which is one of the reasons I can rally around The James Starr. But the strong malt flavors that really popped won the day, and while the style purists would likely declare this a Barleywine, I'd prefer not to enter into these debates. It's a damn good, eye-opening sipping beer, that's what it is. 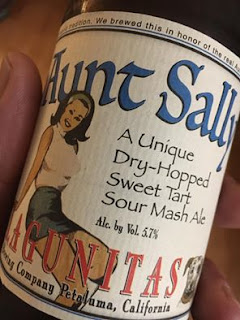 Speaking of beers and breweries that defy neat and tidy definitions, our next brew is Aunt Sally from Lagunitas. According to the Lagunitas website, it was released in March of this year, but I haven't seen it around until recently. If you feared Lagunitas would start becoming more commercial and mainstream after Heineken took a 50% stake in the brewery last year, Aunt Sally should help put your mind to rest. Lagunitas describes Aunt Sally as a "dry-hopped sweet tart sour mash ale", and it's a weird and wonderful combination of sour, bitter, a little sweetness and some musty funkiness. Surprisingly drinkable and further proof that while Lagunitas remains a relentless capitalist machine, they continue to take daring risks. Like many of these moves, it pays off.

Finally, we come to Hangar 24's Chocolate Bomber, a Porter brewed with cocoa nibs and vanilla. Hardly anyone just brews a porter these days. They're usually adding something like coffee or chocolate or hazelnuts or bourbon into it. That's probably because these additions to a base Porter really amped up the flavors.  Like they do in this brew.  What can say, Chocolate Bomber is rich, slightly sweet and complex with lots of bitter chocolate flavors.

That wraps up the rambling for the year.  All the best for the holidays! 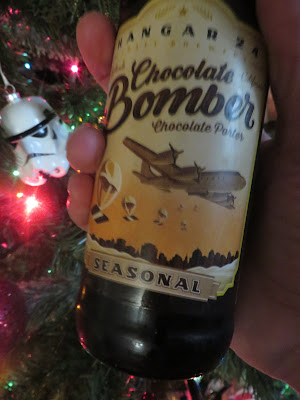