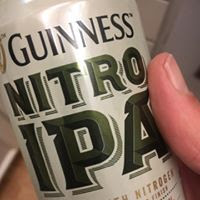 Just a quick editorial announcement: Moving forward, these "Rambling Reviews" posts will not be limited to a review of three beers. I expect to be posting review in the neighborhood of 1-4 brews at a time. I won't bore you with the reason for this, other than to say that three was never really a magic number, and reviewing three beers at a turned out to bit limiting.

OK, now that's out of way, I have a couple new IPAs to ramble about.

Some of the most most fun I've have drinking an IPA in a long time comes from Guinness in their recently released Nitro IPA in a can. Long synonymous with their iconic Stout, they just couldn't resist the temptation to release an IPA that are all the rage these days. It's brewed in the traditional English style, which I found to be a breath of fresh air compared to all the big, bombing California IPA's I'm used to. It's got that nitro do-hicky thing to create the cascading tiny bubbles. The hop character is rather leafy and tea-like, and there's this wonderful interplay between the caramel malt, velvety carbonation, and subdued hops. At 5.8% abv at 40 ibus, less is definitely more. I'm a fan, and beers like this help me understand why some are aghast at what Americans did to the classic English IPA. 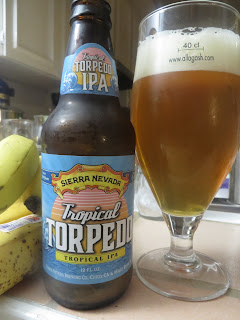 Those who prefer the American version of the IPA will find themselves on familiar territory with Sierra Nevada's latest gem, Tropical Torpedo. It's very tropical. Mango and pineapple dominate the flavor profile bursting of fruit.  The malt is left to be a neutral substrate supporting all those hop flavors.  Not much more to say, and really no surprises here coming from Sierra Nevada. The Chico brewery may be a craft beer dinosaur, but they still find multiple ways to be at, or at least near, the cutting edge of American brewing. Impressive.
at January 30, 2017