Let's start off 2017 by rambling on about beers from some local breweries in and around San Jose.

We'll start with Loma Prieta Oatmeal Rye Imperial Stout from Santa Clara Valley Brewing (SCVB). The tallest mountain in the Santa Cruz mountain range, Loma Prieta is most associated with the legendary 1989 Northern California earthquake. Loma Prieta means "dark hill" in Spanish. As for the beer, it's a subdued, smokey, smooth, and slightly peppery stout, with the complex roastiness forming a nice substrate for the Bourbon and Rye barrel-aged infusions the folks at SCVB introduced into a couple version of the brew. My early beer blogging inspiration and SCVB Marketing Manager Peter Estaniel invited me over to the brewery for a four-sample tasting flight of Loma Prieta on nitroro, all by itself, and aged for ten months in Rye and Bourbon barrels. I would love to give you detailed tasting notes on all the different nuances and subtleties of Loma Prieta, but after a few sips of Loma Prieta, Peter and I started chatting away on sports and beery subjects that taking tasting notes seemed pointless. Loma Prieta facilitating all that engaging discussion is perhaps the best endorsement I could give. 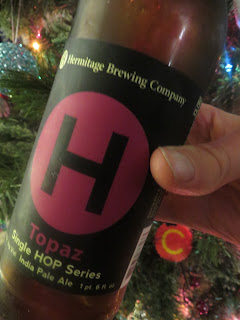 Next up, Topaz Single Hop IPA from San Jose's Hermitage Brewing. Hermitage's single hop IPA series has long been a great way to experience new hops to understand the unique characteristics they impart into beers. That sounds like something only a hard core homebrewer could love, but strangely enough, hops like Topaz prove many hops work quite well all on their own without the usual blending brewers obsess over.  The high alpha acid content of Topaz makes this a rather straightforwardly bitter IPA, but its light tropical fruit and apricot notes save the day. Nice IPA.

Finally, we end with Uncle Dave's Rye IPA from Discretion Brewing, just over the hill from San Jose in Soquel. I enjoyed one of these last week on a family drive up the Pacific Coast when we stopped at the small seaside town of Davenport for lunch. Having many an IPA chock full of as much dankness, piney-ness, and grapefruity bitterness as the brewer could cram into the beer, it was rather refreshing to enjoy an IPA with some flavor and balance to it. It's light rye peppery flavors work well with the stone fruit flavors in this well composed IPA. There's probably a reason this brew has won a bunch of awards for Discretion including a Bronze medal in Rye Beer Category in the 2016 World Beer Cup. Instead of my usual blurry, out of focus beer picture, I'll leave you with a nice shot from Bonny Doon Beach just south of Davenport. 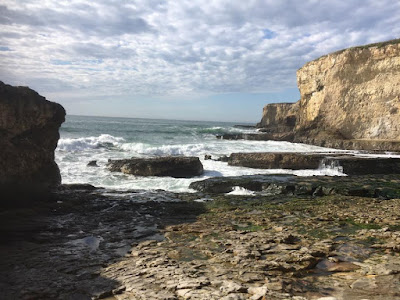