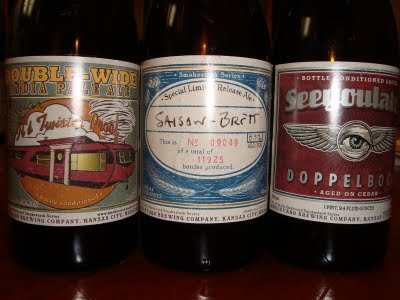 Over the past few weeks, I've been fortunate to sample a few of Kansas City's Boulevard Brewing Smokestack series, since my girlfriend Linda and I visited my sister Leigh and her husband Keith in Kansas City last month. I have to really thank Keith for that, as every evening, even if we'd had plenty of Boulevard's regular beers, he would pull out a bottle or two of one of the Smokestack Series bottles from stored in his fridge and pour everyone a glass. And before getting on the plane and flying home, he directed us to stop at some liquor store called Gomer's, which from the outside, appeared to be a good place to get a 40 oncers of malt liquor to consume on a nearby street corner. But Gomer's had a great selection inside, so I picked up a few Smokestack Series bottles to take home to San Jose. I would characterize the worst beer in the bunch as pretty good, so they're worth hunting down. Here's a quick run-down.

Two Jokers Double Wit
Quite frankly, I think their are way too many "Double Somethings" out there, and the Witbier style doesn't seem to be one to lend itself to "doubling". Then again, Boulevard's ZON Witbier won a gold medal in this years Great American Beer Festival, so if I bite the bullet and try a Double Wit, this would be the one to try. And it is. There's a hefty amount of cracker like malt, and lots of spiciness, with noticeable coriander and cardamon. Some peppery flavors as well, and of course, some bitter orange peel.

A Whole Bunch of Different Saisons
Really, I just couldn't keep all the different Saisons in the series straight. At the Boulevard Brewery tour, they were pouring Tank7 Saison, a dry hopped Saison with a strong lemongrass aroma and plenty of herbal flavors, grassy hop bitterness, and a little lemon in there. Later on, Keith poured us something simply labelled Saison which was more yeasty, peppery, a little grassy and had this tingly carbonation to it. Finally, I took home a bottle of dry hopped Saison - Brett which seemed to have a lot of complex yeast flavors I couldn't quite define, some resin-like character and a musty aroma to go with all that. I'm not a big Saison fan, but they all worked really well. If you have the chance to have a Boulevard beer with the word "Saison" in the title, I say go for it.

Double Wide Double IPA
Lots of grapefruitiness going on here to go with the stiff malt backbone. I liked the bitterness level of this one, as it was very noticeable, but not really aggressive. A little astringent, but got noticeably creamy as it warmed up.
Seeyoulater Dopplebock
It's aged in cedar barrels, and the cedar is the dominant flavor, but it blends well with the caramel and banana-like fruit esters. It's got a complex flavor to it, but still seems crisp and uncluttered.
So glad Leigh and Keith could show us the way around Kansas City. 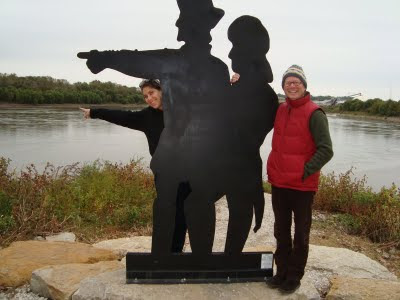