This month's Session, by Andrew Couch, of I'll Have a Beer is on framing beers, with the topic loosely summed up as "write about how the context the beer is presented affects the drinking experience".

Psychologists have long known that our choices are biased by the way each choice is framed. To illustrate this, suppose you are the head of a disease control agency, and are presented with two options to combat a disease which is expected to kill six hundred people unless something is done to stop it. A team of doctors have determined the outcomes of two possible options.

What do you do?

When presented with the same options framed differently, the same participants who picked Option A 72% of the time, instead choose Option D 78% of the time. Of course, we would rather save people than let them die, and so the options framed positively are favored over those framed negatively, known as positive frame bias. (1)

Psychologists have found numerous other framing effects, which I won't go into here. But clearly, the beer we chose and our experience drinking it is framed by things like the beer label, word of mouth, the advertising, the reputation of the brewer, and numerous other sensory inputs that are quite difficult to separate from the actual liquid in the glass. Beer judges have known this for years as most beer competitions are judged blind, where beer is presented to judges in unmarked glasses, and judges are not allowed to influence each other.

I find myself struggling with framing effects explaining craft beer to family and friends who are not craft beer drinkers. Often, they actually would like to drink something from their local brewer, but their perception of craft beer is that it is "too strong", overly bitter, hops run amok, and simply not enjoyable to them to drink. Beer names like "Arrogant Bastard", "Damnation" or "Hop Stoopid" tend to reinforce this notion. I've responded telling them that many craft brewers release lighter styles they might find more enjoyable. More than once, I been told, "Well, I really enjoy Blue Moon, from some small brewery in Colorado". They are usually pretty disappointed to learn that Blue Moon is actually made by Coors, a massive industrial brewery. Coors sells Blue Moon by framing it as a product of some quaint Colorado brewery, and the fact that once people get past the deception, they often lose interest in the beer seems to validate this strategy.

One brewery it took a while to warm up to was Flying Dog Brewery. So many times in a bottle shop, gazing at a wide array of beers in from of me, I simply moved past the frenzied, graffiti-style art Flying Dog uses on their label, and picked up something from a different brewery. In this Session, we've been asked to try beers we wouldn't normally drink, so I decided to try a couple Flying Dog brews, just to see what the beer is like.

As is often the case, stretching my beer horizons was rewarded, as I found the beer to be excellent. The Flying Dog Kerberos Triple had a light toasty yeast flavors with a little apricot, and a clean, clear character to it. Flying Dog's Double Dog Imperial Pale hooked with a great creamy mouth feel, toffee-like malty flavors coupled with a little tangerine and an orange peel bitterness. I can't help wondering why was the beer label art, designed to attract me to the beer, was actually pushing me away. 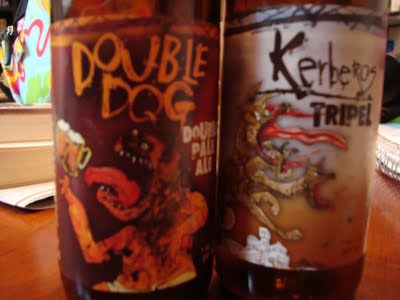 I think the answer to this question originates in the way beer was initially framed to me. I spent my childhood during the 70's in the small Midwestern college town of Bowling Green, OH, located about 15 miles south of Toledo. My dad exclusively drank "33", Rolling Rock, and would carefully allow me a sip of his Saturday afternoon beer. My father later told me he did this to prevent me from abusing alcohol, to demystify beer at an early age. These were also early lessons to respect beer, that it wasn't a beverage to be carelessly guzzled, but to be savored and enjoyed at special times. I also remember Dad proudly informing me Rolling Rock was brewed "in the glass-lined tanks of Old Latrobe" in Western Pennsylvania. Latrobe is about 300 miles from Bowling Green, but in those days, drinking exclusively Rolling Rock was supporting your local brewer, and from this I learned the place the beer was brewed was just as important as the beer itself. These experiences, burned into the neurons of my young brain, still guide me today.

I find it sad and ironic that InBev bought Rolling Rock, shut down the Latrobe brewery, and moved production to Newark, NJ in a cost cutting move, priming the pump of their plans for world wide beer domination. Yet, InBev still has the audacity to market Rolling Rock with the grammatically deficient slogan "Born Small Town", trying to sell the beer by framing it as from a tradition bound, small town brewery. I guess the corporate folks at InBev figured out a more accurate grammatically deficient slogan like "Born small town, multi-national corporation bought brewery, laid off workers, bean-counters rule day" would not be a good way to frame Rolling Rock if they wanted to sell lots of it.

But going back to my earliest framing of beer, I believe my earliest experiences of beer explains my initial aversion to Flying Dog beers, framed in chaotic, modern artwork. I've come to realize my favorite breweries like Anderson Valley, El Toro, and Deschutes are favorites of mine in part because these breweries evoke their unique local geography into their marketing, and are relatively close to where I live. This new understanding about how my beer preferences are shaped will allow me to make more informed decisions on the beer I choose to drink. There's nothing wrong with psychological warm fuzziness guiding what we drink. But of course, craft beer drinking is a lot about exploration and expanding beyond your comfort zone. And if you're going to expand beyond your comfort zone, it's helpful to know where the discomfort is coming from.