The Session #41: How Jimmy Carter Unwittingly Created the "Disruptive Technology" That Launched the Craft Brewing Revolution

For this month's Session, Lugwrench Brewing asked us to write about Craft Beers Inspired By Homebrewing. Here's my take on this topic.

Jimmy Carter was elected the 39th President of the United States of America in 1976, and noteworthy accomplishments during his Presidency include negotiating a peace agreement between Egypt and the Israel in the Camp David Accords, installing solar panels in the White House to raise awareness of the energy crisis, and confronting the Soviet Union on its invason of Afghanistan. After his Presidency ended in 1980, he built homes for the homeless all over the world as a key advocate for Habitat for Humanity, and served on many international diplomatic missions, ultimately winning the Nobel Peace Prize in 2002.

But for most craft beer drinkers, his enduring legacy as a public servant was cemented on October 14th, 1978, when he signed H.R. 1337 into Federal Law. This innocuous bill, which mainly dealt with excise taxes on trucks, buses, and retirement plans included a Senate resolution, largely credited to California Senator Alan Cranston, which gave states the right to legalize home brewing. Several states quickly granted their citizens the right to brew beer in low quantities for their personal use, and the craft brewing community generally looks back on the day Jimmy Carter signed this obscure tax bill as the day the craft brewing revolution was born. 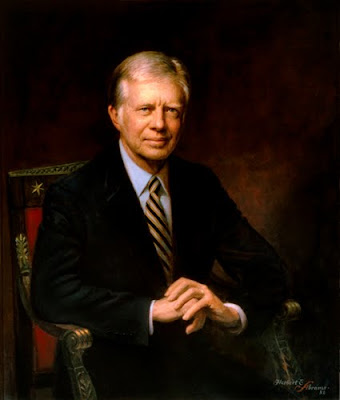 It's a story most craft beer aficionados are aware of, but nobody seems to ask why it was this small act of alcohol deregulation launched the craft brewing revolution, and not something else. Why wasn't it the far more sweeping repeal of prohibition? Or the passage of some other minor law? How did allowing a small group of hobbyists to legally brew beer in small quantities evolve into the multi-billion dollar craft brewing industry?

Of course, you cannot legally sell homebrewed beer, but the prevalence of legal homebrewing exposed more people to alternatives to the light lagers dominating the market. And many home brewers were learning in their own way to be commercially brewers. But to my mind, this really doesn't explain how craft brewing went from totally under the brewing industry's radar to a force that has large, multi-national corporations back on their heels as it steadily gains market share.

I believe the reason for this dramatic turn of economic events caused by a bunch of backyard homebrewers is that they created a "disruptive technology", as described by Harvard Business Professor Clayton Christensen, who popularized his theories in 1997 with his book, The Innovator's Dilemma. Christensen noticed that revolutionary business change often came from unexpected directions, from technologies actually considered inferior to incumbent technologies, and which established businesses had very sound reasons to ignore. And yet, these disruptive technologies would later revolutionize industries, with upstart companies embracing disruptive technologies overtaking established incumbents. Christensen largely cited case studies from the computer, communications, or electronics industries, which we normally attribute to technological change, to prove his points. But I believe his theory on disruptive technologies and economic change explain why so many small breweries founded by homebrewers popped up all over the United States.

The first legal home brews in the late 70's were beers most people found strange and unusual, if not outright undrinkable by those accustomed to light lagers. But some found these unique and flavorful beers highly appealing, to the point they would tolerate the uneven, and sometimes poor quality of homebrews from that time, when homebrewers had far fewer resources to guide them as they do today.

"...technologies can progress faster than market demand...means that in their efforts to provide better products than their competition and earn higher price and margins, supplier often "overshoot" their market: they give customers more than the need or ultimately are willing to pay for. And more importantly, it means that disruptive technologies that may underperform today, relative to what users in the market demand, may be fully performance-competitive in that same market tomorrow."

Mainstream brewers in the late 70's and 80's could offer only barely perceptible improvements to their customers. With their light lagers highly engineered to be have attributes like "less filling", "tastes the same every time", "lightly drinkable", and "price competitive", they were somewhat boxed in a corner, with little they could further add to their products.

On the other hand, homebrewers commercializing their beers were learning new and better brewing techniques leading to better beer quality and consistency, as well as new styles and flavor combinations. And each successive significant improvement earned them additional customers, while larger breweries had really nothing new to offer. Over time, home brewers turned businessmen learned to produce a more commercially viable product as they continued to learn how to better deliver what their customers wanted, and more and more consumers learned these smaller breweries had more to offer.

Why didn't large corporate breweries recognize what these growings legion of homebrewers turned commercial brewing doing, and introduce their own alternatives to their light lagers? After all, they employ some of the best brewers in the world. And with their deep pockets, shouldn't they financially outlast the typical homebrewing entrepreneur, who often went deep into debt pursuing their passion?

It is not because these large corporate brewers are blundering, stupid and inept. It's because they were listening to their customers, trying to give them more of want they wanted, and ignoring a small market segment that was not very profitable. Which left the opening home brewers turned commercial brewers seized in the pursuit of their dreams, and now the large corporate breweries are trying to play catch up by doing things like InBevAB investing in breweries like Widmer Brothers and Goose Island, or MolsonCoors launching their own niche, craft-like brand Blue Moon.

So for this session, let's salute the homebrewers who have gone on to produce the craft beer we are all grateful for, and the President who made it possible. And without Jimmy Carter's signature, we'd probably all still be drinking stuff like Billy Beer.
at July 02, 2010