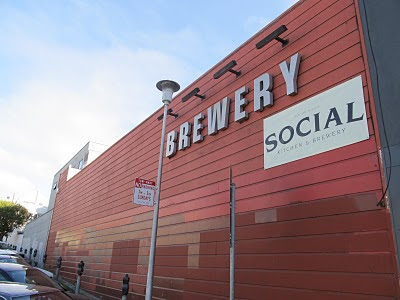 Brewmaster Rich Higgins of Social Kitchen and Brewery is probably thankful I'm finally paying him for his beer. I've sampled it at a recent beer festivals, at which he likely provided gratis. And while I've given him genuine compliments of it at those festivals which he likely appreciates, when it's time for him to pay his employees or the loans on his brewing equipment, kind words uttered in his direction are not going to do him much good. Linda and I have been meaning to go to Social Kitchen for some time since it opened earlier this year, and we finally got a chance to visit on a crisp, sunny Saturday afternoon.

Located just south of Golden Gate Park on 9th street, it's at the former site of defunct Wunder Beer. I've heard talk that this slightly snake-bitten location is not a good one for a brewpub. But maybe because that's because the area feels like an actual San Francisco neighborhood, rather than the contrived tourist attractions where many of San Francisco brewpubs are found. The periodic rumbling from the Muni trains rolling down 9th street gave the place an authentic urban feel, an acoustic connection to the surrounding city. Dark brown wooden panelling gives the place a somewhat sophisticated look, with the otherwise light and airy interior providing a welcoming feel.

As for the beer, you have salute a place where session beers figure prominently the beer line-up. Social Kitchen didn't have an Imperial-anything on their tap list that day, and we didn't miss them at all. One of my favorites is their L'Enfant Terrible, described as a Belgian table beer which has a nice mix of chocolate and roasted malt, with a little fig and a little spicy zip to it. I also enjoyed the Old Time Alt, a robust alt-style beer with a decent amount of rich, roasted malt with a woody character to it.

Of course, Social Kitchen does more than just drinkable session beers. Leave it to a California brewery to call an IPA with 65 IBU, their Easy IPA, which they describe "your friendly, neighborhood IPA". There's not much heft to the malt to balance of that floral hop goodness, but the lack of balance works in favor of this brew, which really has a intense, very flavorful floral vibe. Lots of California brewers try to make beers like this, but end up simply socking you in the taste buds with simple, non-descript hop bitterness.

As for the food, I am no food critic and will do my best and try not to pretend to be one here. Linda and I enjoyed the whimsical Brussels Sprout Chips appetizer. It sounds like a kids worst nightmare, but the lightly fried, salted thinly sliced Brussels sprouts was almost as addictive as popcorn. Almost. As for the menu, it's a notch above simple brewpub fare, but otherwise is pretty accessible and straightforward. Linda and I found our food to be well executed, and really liked the warm neighborhood feel to the place. Call Social Kitchen and Brewery your friendly neighborhood gastro pub.

Finally, for "dessert", we tried the Dapple Dandy Grand Cru. Made from their Raspcallion Belgian Ale, with a little red ale, and lots of Dapple Dandy pluots, I'm finding it elusive to describe. I appreciate the light touch with the fruit, as the fruit flavors blended with a light clove spiciness, a little sweetness, and a tannic-like bitter finish. I'm not sure this beer totally worked, but give them credit for something creative, complex, and interesting.

I'll pay Social Kitchen and Brewery perhaps the highest possible compliment by saying I really wish it was in my neighborhood. 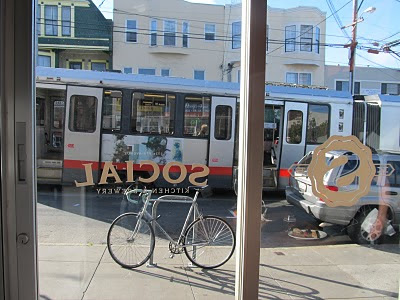