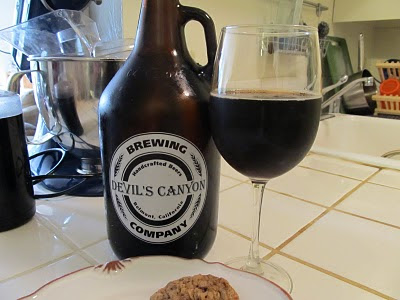 I thought about featuring a winter seasonal for this January's Beer of the Month, but plenty of craft breweries have pulled their winter seasonals from the shelves, replacing them with their spring seasonals. It's bad enough when I go to K-Mart in the middle of October looking for Halloween costumes for my kids and they already already have the Christmas trees and decorations up, but here in the middle of winter, it's getting awfully hard to find a winter seasonal. Craft breweries alway claiming to be so much better than big corporate breweries often by the sole virtue of being smaller local companies, and if they stopped imitating the annoying habit big corporations have of releasing seasonal products months before the actual season they are intended for, this superiority they claim over big corporation would gain additional credibility.

Thankfully, Devil's Canyon Brewing Full Boar Scotch Ale, is available all year around, even if it seems ideal for winter. So ideal in fact, that I got myself a growler of it for the holidays, sipping out of port glass on cold winter nights. OK, it rarely gets below 40 degrees Fahrenheit at night in the Bay Area, but having gotten soft living here for ten years after moving here from the midwest, at least 40 degrees feels cold. It's a damp cold.

I quite enjoy all the flavors from the dark malts which combine with buttery, toffee-like notes with light molasses, and savory umami flavors. Try as I might, I couldn't detect any hops, even though I figure there's some in there. It's complex, but not heavy, making it very versatile beer that's both very drinkable and great sipping beer.

Devil's Canyon Full Boar Scotch Ale can be found in multiple locations up and down the San Francisco peninsula, or you can pick up a growler from the brewery in my hometown of Belmont. Enjoy it this month after a day shopping for Easter decorations.
at January 18, 2011