My Tongue Survived an IPA Tasting 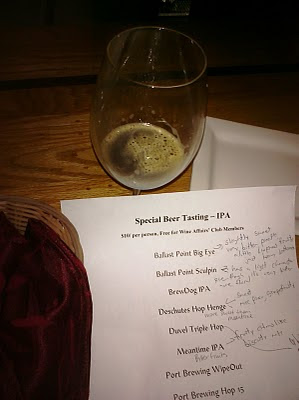 One thing I've learned from running is that the human body is capable of remarkable adaptation from repeated stress. While an IPA tasting of this hop heavy beer style normally results in my tongue sticking to the roof of my mouth and my lips left paralyzed in a permanent pucker, it looks like all those California hop monsters I've withstood over the years have conditioned my taste buds so that I can actually taste the subtle flavor components of beers that once upon a time tasted like chewing on an old bicycle tire.

The best beer bar in the South Bay is ironically called Wine Affairs, and they put on beer tasting events once a month. This month, it was an IPA tasting event consisting of no fewer than ten different examples of the IPA style, and with my wife Linda being a closet hop head, it seemed like I could talk her into going with me and putting off doing the laundry another day. Thankfully, she took me up on it.
My usual "brilliant" comments on an IPA typically consist of "this tastes pretty bitter" or "it's rather hoppy" but once you begin to taste them in series, even I could start tasting the differences. We started out with Meantime IPA ("fruity and citrus like, biscuity malt") progressing to Deschutes Hop Henge ("sweet, piney and grapefruity"), Ballast Point Sculpin ("light body, strong floral bitterness"), and then Duvel Triple Hop ("aromatic, coriander flavors with grassy and herbal hops") before my taste buds gave out after about the sixth beer, and all I could say "Yeah, that's bitter all right". Linda, on the other hand, had no problem getting through the whole flight.
Maybe I should ramp up my training by sucking on hop pellets to keep up with her.
at January 11, 2011