Beer of the Month: Retribution from High Water Brewing 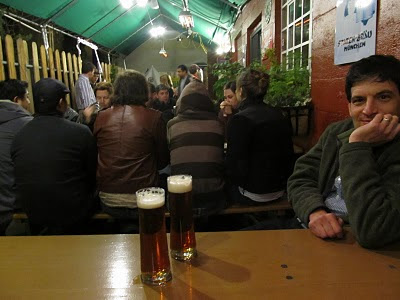 February's Beer of the Month is awarded to a new brewery in the Bay Area brewing scene, High Water Brewing, founded by acclaimed brewmaster Steve Altimari. Altimari was brewing highly regarded ales at Valley Brewing in Stockton, CA before his abrupt dismissal last year for curious reasons that remain elusive. I can only go by what I read of this particular break-up, but on a 1-10 scale of break-up animosity, where "1" means "they still remained really good friends" and "10" means "resulted in a murder-suicide", this one seems to rank about an "8". And so it seems natural Altimari would name one of his first beers Retribution, which Wiktionary defines as "punishment inflicted in the spirit of moral outrage or personal vengeance."

I sampled Retribution at a Meet the Brewer Night held at Gourmet Haus Staut, a San Francisco Beer Week event, where Steve Altimari was on hand to discuss his beers, and got a minute to chat with him. Understanding one can only take an approximate measure of a man upon meeting for the first time in a loud, packed bar, for only a minute, Steve's calm and solid stature, measured and easy going demeanor, and long salt and pepper hair tied back neatly in a long pony tail suggests someone more likely to name his brews along the lines "I'm OK, You're OK Ale".
Retribution is a fantastic Imperial IPA, composed of lots of strong herbal, grapefruity hop flavors balanced by lots of rich, slightly sweet and lightly caramelized malt that goes down really smooth for all of its intensity. Somehow, all those 95 international bitterness units embrace, rather than attack the palate and I found this beer, for all its strength and power, actually easy drinking. At 9.5% abv, it literally and figuratively knocked me out.
Retribution is such a good brew, I would have one with my ex-wife, except she still doesn't drink beer.
at February 18, 2011