Nanobreweries are Big Stuff at the Breweries of Tomorrow Festival 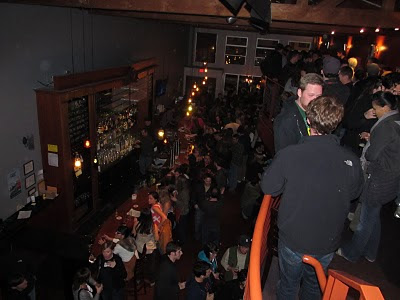 I should have expected my predicament. Plenty of people I spoke to in the days leading up to SF Beer Week cited the Breweries of Tomorrow NanoBrewery Festival as one event they didn't want to miss, which featured a number of small, new breweries in the process of commericializing their operations. This explained why my wife Linda and I were stuck way in the back of a stagnant line leading out the door of Social Kitchen and Brewery and all the way down the adjacent parking lot at 6 pm on a cool Sunday evening. We considered going somewhere else that evening, but decided to wait out the line in hopes we could get in. But with the line not appearing to budge one bit, it was not looking so good for our plans.

Linda and I did eventually make it inside after about an hour of patiently waiting. There is a certain irony in the fact that I wouldn't dream of standing in line for an hour for a pint of something like Pliny the Younger from one of my favorite breweries Russian River, and yet here I was, standing in line for an hour for beers from a bunch of brewers I basically knew nothing about. You could say this experience gave me a new perspective on waiting in long lines for hard to find beers, since as soon as we got inside, Linda and I pretty much left our frustrations outside and enjoyed this quirky, crowded, and unusual festival.

What struck us was how these new comers genuinely produced beers every bit innovative and well crafted as anything you can find in the Bay Area. Linda and I tasted about twelve beers between us and were impressed by many of them, not finding one clunker in the bunch. It was fun talking to folks in the crowd, asking what they liked, getting various impressions from different breweries that were complete wild cards to virtually everyone in attendence. I was also glad to bump into fellow beer bloggers John Heylin and Matt Knopf.

So congratulations to Brian Stechschulte, creater of the Bay Area Craft Beer Website and blog All Over Beer, who organized this unique event that succeeded beyond everyone's expectations. And congratulations to all the nanobrewers, who proved they can craft a beer every bit as good as the big boys. While they were all good, I'd like to cite four beers that Linda and I tried that really stuck out from the rest. (Sorry if I got anything wrong here, the crowd made it difficult to take notes and I was just trying to enjoy all the new beers, so my note taking that evening was not the greatest.)

Peppermint Porter from 510 Brewing
Peppermint what? Both Linda and I both thought we weren't going to like this beer, judging it only by the name. Surprise, surprise, it was our favorite of the night. The peppermint is rather up front, but blended well with the roasted malt flavors of the porter. Think of a peppermint patty and you start to get the idea. 510 Brewing's Travis Smith explained this was their idea as a winter seasonal beer, since peppermint is a flavor associated a lot with the winter. I don't know exactly why this beer worked, but give these guys credit for trying something original and pulling it off.

English IPA from Orange and Black
I just loved the great hop aromas eminating from this well balanced and refined IPA brewed in the English style. If these guys keep brewing beers this good, they really ought to get themselves a website.

Can't wait for some of these brewers to give their beers actual names!

I look forward to all the brewers going pro, and might even wait in line over hour for their beers even then.