A Beer Runner in Hollywood 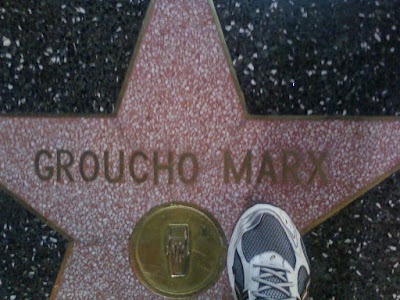 The city of Hollywood rarely evokes thoughts of beer or running, so I didn't know what to expect when my business travels took me there last week. My job involves an extremely unsexy niche' electronic equipment which related to an equally unsexy trade show being held at the Los Angeles Convention Center, and with downtown LA hotel prices what they are, we ended up staying to Hollywood to save a few bucks. So the burning question I had, which no doubt most of you have been contemplating for years was "What's the beer running like in Hollywood?"

Things were not looking so good the first night's dinner at a California Pizza Kitchen in a garish mall on Hollywood Boulevard, as our waiter explained the tap list included "local beers" Sierra Nevada Pale Ale and Pyramid Hefeweizen. Considering those respective breweries in Chico and Berkeley California are 460 and 370 miles away, neither of those beers were particularly local. I was trying to think of a diplomatic way to explain this to the waiter without being too obnoxious, which for me is no small accomplishment. But can you think of a beer, any beer, associated with Los Angeles? Me neither. I shut up and ordered a Sierra Nevada Pale Ale.

That night, I wandered around Hollywood Boulevard, looking for interesting places to have a beer or two, only to find one dismal tap list after another. Finally, I stumbled upon the historic Snow White Cafe, which has been around since 1946 according to the sign outside. There's something pitch perfect amongst the dissonance of a hole-in-the-wall dive bar on Hollywood Boulevard decorated in a Snow White and the Seven Dwarf's motif. The jovial, sandy haired, 20-something barkeep wearing a white Playboy T-shirt with an undefinable European accent seemed to fit right in. If your idea of an exotic tap list is Coors Light, Budweiser, Sam Adams, Redhook, and Widmar Brothers, you've come to the right place, and you'll never forget this cheerfully funky place.

Running on the Hollywood Walk of Fame the next morning was a bit of a feat. The hard part is reading the names on all the stars as they whiz underneath your feet while running along without tripping on the uneven sidewalk, and doing a faceplant on say, Tallulah Bankhead's star. Hollywood Boulevard is actually a pretty ordinary street, and a lot of it runs through industrial sections of the city. Bob Hope's star is actually in front of a vacant lot in a rather barren neighborhood. Maybe it was a nicer place once upon a time, but you would think his people could've got him a star in a lot better location. At the end of the first mornings run, I stumbled upon Runyon Canyon Park. I didn't have much time to explore it, but figured I would come back the next morning. 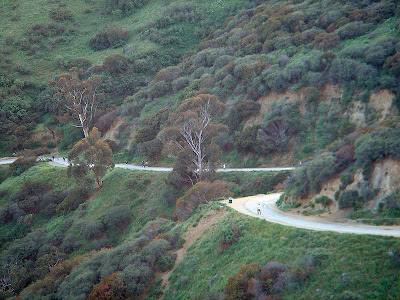 It turned out to be a great find. Runyon Canyon Park is a narrow strip of 130 acres, with one end near downtown Hollywood and the other end way up the canyon at Mulholland Drive, so if you plan to run these trails, get ready for lots of steep ascents or descents. Do so, and you'll be rewarded with great views of both downtown Hollywood and Los Angeles, as well as great view of the "Hollywood" sign from the side, rather than from the bottom of the hill the way most people see it. Lots of people were out each morning walking their dogs, or getting their morning walk or run in. There's no better way to explore a new place than to run around in it, and finding places like this, which provides a unique, local community perspective.

With all due respect to the Snow White Cafe, I decided to consult The Beer Mapping Project, in hopes to find local Los Angeles beer somewhere, anywhere. As it turned out, just a couple blocks away from the Snow White Cafe was Lucky Devil's, basically a burger and barbecue place with about ten excellent taps. Finally! Some local beer to be found. The first LA brew I tried was 1903 Lager from Craftsman Brewing of Pasadena, CA, an interesting bready, slightly sweet and lightly hopped lager. Even better was the Hell Hound Brown Ale from Cosmic Ales in nearby Corona, CA. Brown ales can be a bit of a boring style, but this one had a great combination of bitter, sweet, nutty, and slightly aromatic flavors. If you go to Lucky Devil's, make sure you have room for dessert, as they specialize in Liege waffles, a thick bready Belgian waffle, which they drizzle with this yummy Chimay beer caramel sauce.