Beer of the Month: Hop Juice from Two Brothers Brewing 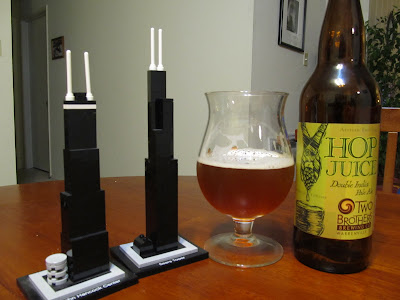 The Beer of the Month is Hop Juice, a Double IPA from Two Brothers Brewing I discovered on vacation taking my wife and kids to visit my parents where I grew up in Oak Park, IL, located just outside of Chicago. We also visited my brother and sister in-law in nearby Naperville. While a family trip is not an ideal time to go beer hunting, I did have a moment of male bonding with my brother-in-law at a Binny's. Binny's is a big box chain of beverage stores, the Midwestern equivalent of BevMo!. I heard a lot of good things about Two Brothers from my dad and brother-in-law, so when seeing their Double IPA through the windows of one of Binny's upright fridges, I grabbed one curious to see how it would compare to all the West Coast hop monsters back home.

Pretty damn well if you ask me. It's a blitz of fresh, intense hops flavors dominated by grapefruit peel, with a little tangerine in the mix that's well balanced by a slightly sweet malt. What really distinguishes this one was all the bright hop flavors that go done smooth, unlike a lot of hop bombs which can be rather harsh and astringent. I'd be willing to bet if you got a bunch of Pliny the Elder bottles, filled them up with this beer, capped them, and gave them out, no one would catch on. It really is that good.

Two Brother's Brewing was founded by, you guessed it, two brothers Jim and Jason Ebel who founded the brewery in 1996 following their home brewing aspirations. Located outside of Chicago in Warrenville, IL, I had a few of their other beers during the vacation, and every one of them was at least "pretty good" or better so you definitely want to check these guys out if you have a chance. The care and passion you expect from a family business really shows in their beers.

Speaking of families, my ten year old son Brandon built those Lego models of the Sears Tower and the John Hancock Building in the picture. Give him a Lego model and he gets very quiet and focused following the directions to build it, a certain strength drawn from his autism. My eight year old daughter Verona is more into art, and became an expert in identifying Frank Lloyd Wright's architecture in my home town of Oak Park, where Wright designed several houses. My new wife Linda has been great for the kids, and for me. Brewing or otherwise, families are precious. 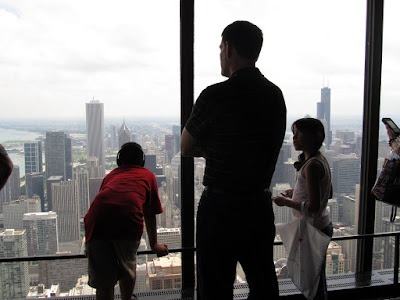