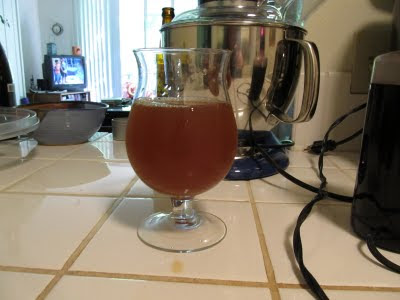 There's a saying that anything worth doing is worth doing badly. I can brew pretty badly. Even worse, I malign my own kids while doing so, as my latest versions of Verona's Coffee Porter and Brandon's Brown Ale had all sorts of odd, sour tastes most likely due to some lax sanitation practices. One of the things about home brewing is that you learn that the art of brewing is not so much about romantic ideals of developing great recipes or creative use of ingredients, but mostly about just keeping the damn brewing equipment clean. And if you've ever seen my desk or closet, you know that's going to be a big challenge for me.

So I attempted to clean the bejesus out of everything to make my last brew, a simple Pale Ale, and was just hoping for something drinkable. And the good news, the sour taste the plagued the last couple batches is gone! The bad news is, the brew tasted rather muddled, and most likely some residual cleaning solution and chlorine got into the beer which likely contributed to its muddled, murky taste, which could best be described as malted ice tea. That's a small victory, if you want to even call it a victory, but I'll take it at this point.

All this effort to brew something that I might actually enjoy is creating a new found appreciation for the talents of all the great brewers out there. I began to fully appreciate the amazing accomplishments of world class distance runners after years and years of hard work still left me hopelessly behind runners that world class runners left hopelessly behind. Of course, finishing a race well back in the pack has its own rewards. Drinking crappy beer is pretty horrible.

Running teaches the value of persistence, so I'll just keep at it, and eventually, the hard work will pay off. Drinking your own bad beer is pretty hard work.
at July 07, 2011