The Brooklyn Brew Shop's Beer Making Book: Homebrewing for the Rest of Us 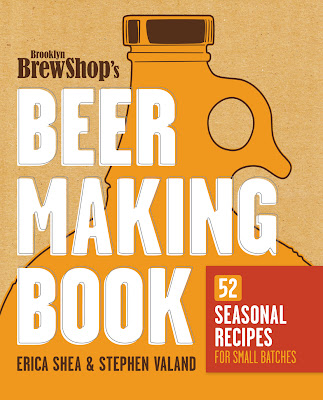 Last time I brewed a five gallon batch of stout in my small cramped apartment kitchen, lugging around all the hot liquids in heavy containers created all sorts of spills, drips, and splatters that by the time I was done, it looked like someone with stout colored blood had been murdered in my kitchen.   I don't home brew as often as I'd like since my small apartment kitchen didn't seem like good place to do it.  But my kitchen is an ideal place to brew using standard equipment found in most kitchens to make smaller 1 gallon all-grain receipes, as I found out reading the The Brooklyn Brew Shop's Beer Making Book, writen by Stephen Valand and Erica Shea, owners of the The Brooklyn Brew Shop.

"We wanted to create something where people familiar with a cook book could just start making beer," explains co-author Stephen Valand.  "We didn't want to say, first thing to do is go to a hardware store."  The book describes how to brew beer in small, scaled down 1 gallon batches, a far more manageable size than standard five gallon recipes found most in home brewing books and magazines.  At these small batch sizes, little specialized equipment is necessary to brew beer, such that "..if you've ever made a pot of pasta, you're in good shape".

Erica and Stephen founded their business in 2009 the way a lot of business are created: Through serendipity, followed by looking around, asking questions, and recognizing a unmet demand.  In their case, it started when Erica discovered an old glass carboy in her father's basement from his brief home brewing excersion fifteen years ago.  After making ice cream and pasta from scratch, Stephen and Eric decided their next food project would be to brew beer, so they went about reading up on home brewing.

"A lot of the books seemed to be written for someone with a Ph.D. in Chemistry," recalls Stephen.  "and there were really no place to get home brewing equipment in New York City."  This was largely due to the fact that homebrewing emerged as a hobby in the 80's where 5 gallon and larger batches of beer were typically brewed in backyards, basements, and garages to accomodate equipment like large propane heating torches.   Few New York City homes had the space and facilities to accomodate this, something plenty of people in San Francisco Bay Area can relate to.

After adapting standard home brewing techniques to one gallon batches, they developed their own one gallon recipes.  Realizing that food conscious New Yorkers were ill-equipped to join the craft and home brewing revolution, they started selling home brewing kits at the Brooklyn Flea, a local food and crafts fair, in 2009.    Making brewing accessible to the masses turned out to be good business, and they expanded into a 6,000 square foot warehouse a year later to keep up with demand.   Today you can purchase their kits and recipes in Whole Foods, Williams-Sonoma and other retail locations all over the country, as this handy dandy store locator on their website will show you.

As for their new book, it explains the equipment needed to brew one gallon batches, with a brief introduction to brewing malts, hops, and beer styles in simple direct manner.  What follows are 52 different brewing recipes, with a few standard beer styles like IPA's, Porters, and Pale Ales, but plenty of beers that are kind of out there, such as Lady Lavender Blonde Ale, Eggnog Milk Stout, and Lobster Saison which is brewed using an empty lobster shell.

Of course, it took some experimentation to come up with all those different beers.  "There are a few beers we made that have been hidden away, and we don't talk about," concedes Stephen.  "We experimented with a lot of different woods for our Bourbon Dubbel.  We tried cedar wood, which someone told us was poisonous.  It tasted like drinking the closet."

And if you ask me, experimentation and sharing beer you made with family and friends is the best thing about home brewing, an element sometimes lost in the home brewing community, where there can be a lot of emphasis on reproducing and miniaturizing an actual brewing operation.  Given the fact any professional brewing operation, even your local craft brewery, is mostly concerned with sanitizing large metal objects and meticulously pouring over brewing data to brew batch after batch of identical tasting beer, it is not surprising that a lot of mainstream home brewing really doesn't resonate with the general public.

And this book brings up one of the parallels I've descovered about beer and running.  One of the best things about running is you don't need any special equipment or belong to any elite club.  All you need to do is lace up a pair of running shoes, go outside, and you're a runner.  One of the best things about beer is that if you take grains, hops, water and yeast and combine them the right way, you're a brewer.  Thanks to this book, more of us can be brewers.

(An advance copy of this book was provided by Randon House Publishing for the purposes of this review.)