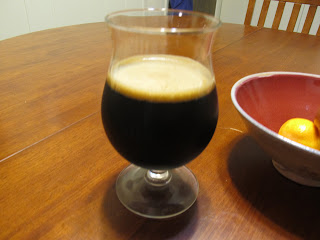 You'd think after the last three batches of home brew that ranged from barely drinkable to down right awful, I should just give up brewing altogether.  But then, there have been times running where long term fatigue and multiple injuries lead to pain and frustration for weeks and months on end.   It happens to a lot of runners, and you need just keep working through the difficulties and find ways to correct the problems to eventually come through it a wiser runner than before.  So in that spirit, I just kept at it with home brewing.  Of course, it is also possible the culmulation of all those slight jolts to my head with each running footstrike over 30 years has resulted in a certain level of  brain damage which clouds my judgement.

So whether motivated by positive thinking or simple brain dysfunction, I decided to brew a Habenero Chile Stout feeling slightly confident I'd isolated the source of the contamination that soured my last brews.  You may reasonably ask "Why on earth would you brew something like that?".  I would like to answer the strong, roasty flavors of stout and stimulating Habenero chiles are part of my personality, vision, and creativity as a brewer.  But the more honest answer is that agressively roasted malts and hot chiles are great at masking any off-flavors lurking around in the brew.

After mashing and sparging the grain, the resulting wort and powered extract was boiled for 90 minutes.  With five minutes left in the boil, I added this spice mix:

English Ale Yeast was used to fermet the brew, which was racked to a secondary in three weeks, and then bottled two weeks later.

The idea was to replicate Mexican chocolate, with a little heat mingling with the roasty chocolate flavors.  I'd say this came close.  You can certainly detect the heat from the Habeneros.  Its strong, but I didn't find it overpowering, and it takes front stage to a complex roasted malt background.   I'll also add that the heat from the chiles mellowed after the bottles had aged after 3-4 weeks.   I thought it was and interesting and unique beer, but then since I brewed it, I'm bound to be biased.

So I took a bottle to this month's Bay Area Beer Bloggers meet-up and bottle share to see what experienced beer drinkers in the Bay Area Craft Brewing community thought about at.  I've known Brian Stechshulte for nearly a year and being that I am a graduate of The Ohio State University, find him to be an inspiration as he's overcome his education from the University of Michigan to become a decent, productive member of society.   (We don't need to talk about last weekend's Ohio State-Michigan game.) I don't recall what he said about the Habernero Chile Stout or if he even tried it.  For some reason, he seemed more interested in sampling from bottles of 2009 and 2010 vintages of the always excellent Deschutes' Abyss sitting on the table, as well as all the other stouts available that night from highly renowned and hard to find breweries than something from a hack homebrewer who insults his alma mater on a regular basis.  Imagine that.

Next up was John Heylin who remarked "The chiles are noticeable, but not that hot.  It's smokey."  Colin James, who graciously hosted the bottle share at his apartment agreed "You can certainly taste the chile powder".  Both Chuck Lenatti and I noticed a metallic taste.  There are know-it-alls who claim "metallic" is an off flavor, but it actually provides a mysterious complexity to the brew.   Beyond that, the silence was a little telling.  Nobody came out and said "I don't like this" or even "this sucks" something people often think, yet rarely say, but nobody said "this is good" or "I like it" either.    Never the less, I'll take this polite awkward silence as a ringing endorsement from the Bay Area Beer Bloggers of my latest home brew.