Beer of the Month: Noma Weiss from Sonoma Springs 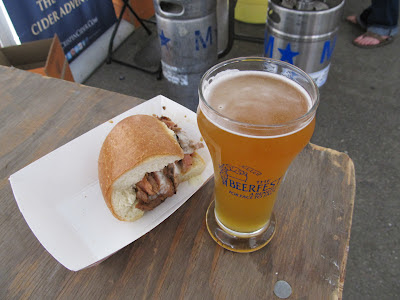 The Sonoma Beer Fest, held last June 2nd in Santa Rosa, has in a couple short years become my favorite beer festival.  Located less than a two hour drive north from my home on the San Francisco Peninsula, it always features something old and something new.  You can never go wrong with breweries like Russian River, Bear Republic, Moonlight Brewing, or Moylan's, but there's always a great new brewery that's popped up to discover at this festival held in a region of the country where fermentation, whether of grapes or malt, is a driving force.

So the Beer of the Month of June goes to Sonoma Springs for their pouring of an arresting Wheat Ale call Noma Weiss at the Sonoma Beer Fest.  That's right, I used "arresting" and "wheat ale" in the same sentence.   It's got this strong, yeasty, fruity vibe that made me sit up and take notice upon first sip, which I found difficult to deconstruct into any recognizable flavor components.  And while you could make a case I don't have a trained palate to evaluate beer into flavor components and just sort of wing it with Internet beer reviews, I find "indescribable" to be the mark of a great beer.  If I like it that is.

And I also recommend Sonoma Springs's Black Forest Black IPA, but their Noma Weiss seemed to go better with the beef sandwiches they were serving next to their booth at the Sonoma Beer Festival, so it's my pick.

Email ThisBlogThis!Share to TwitterShare to FacebookShare to Pinterest
Labels: Beer of the Month, just winging it with beer reviews on the Internet, Sonoma Beer Festival, Sonoma Springs Brewing