Beer of the Month: 395 IPA from Mammoth Brewing 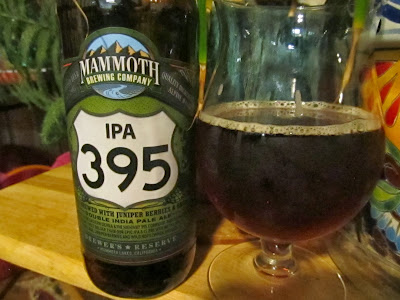 For October, the title of Beer of the Month is bestowed onto 395 IPA from Mammoth Brewing, which I picked up on a trip to Yosemite National Park the weekend of September 28-29th.   Mammoth intentionally keeps their operation small, and you can't get their beer outside of their small distribution region in and around the Yosemite Valley, so tasting some Mammoth brews unavailable back home was a nice little side benefit of the trip. This beer, named after a road running by the National Park, has long been a favorite beer of mine.  It's one of the more unique IPA's you'll find, brewed with mountain desert sage and mountain juniper berries.    There's a light toastiness from the malt, a noticeable gin note from the juniper berries, and dominant citrus flavor from the hops.  It's a dry IPA that lets of that complexity flow, and tastes smooth despite a strong hop whollop.

I make an annual trip to Yosemite with friends and family to experience the surreal scenery, full of shear cliffs, dramatic waterfalls, and towering peaks.  I'm especially proud of my ten year old daughter and twelve year old autistic son who tackled a six mile hike through steep, rocky to Vernal Falls high above the valley with my wife and I.  It was great family experience exploring one of America's revered places and learning a lot about ourselves.  We finished this trip in the nick of time because shortly after that, the Washington dysfunction all too common these days shut the Federal Government down and Yosemite National Forest with it.

You're probably as sick of this shut-down mess as I am, and it's doubtful anything I write here is going to change your mind or break the gridlock in Washington.  I avoid delving into politics on my blog as beer and running draw people in from all walks of life and all are welcome on the open roads or to share a pint.  I'm one of those damn liberals, so you can probably figure out where I stand.

So I'd like to make this gentle reminder that Yosemite was long ago preserved by far-sighted minds in our Federal Government who saw a problem and addressed it, and pretty much everyone thinks they did a good job about it.  While rewarding family vacations are important, what's more important are our livelihoods which require a functional Federal Government.   An unintended consequence of the shutdown is that we all gained a new appreciation of what the Federal Government does for us every day, even if we don't like paying our taxes or dealing with rules.

So I'm optimistic that a year from now when our family comes back to Yosemite, saner heads will prevail and our country will be both better and wiser from our collective experience, as contentious and destructive as things are right now.  I'll drink a 395 IPA to that.

Email ThisBlogThis!Share to TwitterShare to FacebookShare to Pinterest
Labels: Beer of the Month, IPA 395, Mammoth Brewing