There's so many new breweries these days, it's hard to keep track of them all.  One that's definitely been on my radar screen is Headland's Brewing.  Co-founder Patrick Horn was part of San Francisco's legendary Pacific Brewing Laboratories, sort of an underground brewery/large scale home brewing operation run out of a San Francisco garage producing an eclectic and tasty mix of brews of every possible description.  Horn has recently left Pacific Brewing Laboratories to start Headland's Brewing three months ago with Phil Cutti, head brewer at Southpaw Barbecue.  Phil is also an endurance swimmer and former exercise physiologist at Stanford Sports Medicine.

The brewery is named after the Marin Headlands, and they are currently seeking a permanent brewery and tap room location in either Marin County or San Francisco, which is where most of their beer is distributed.  For now, they are brewing under contract at various Bay Area breweries, and as far as the South Bay goes, the only place you can find Headlands is at Campbell's Spread and Liquid Bread.

I caught up with Phil and Patrick at Campbell's Spread last week where they graciously introduced me to their beers.  Somehow, they've developed the unique and all too rare talent to put subtle twists on traditional beer styles in such effective and effortless ways, you end up wondering why brewers haven't been doing it that way all along.  So without further ado, let's delve into the beers of Headlands. 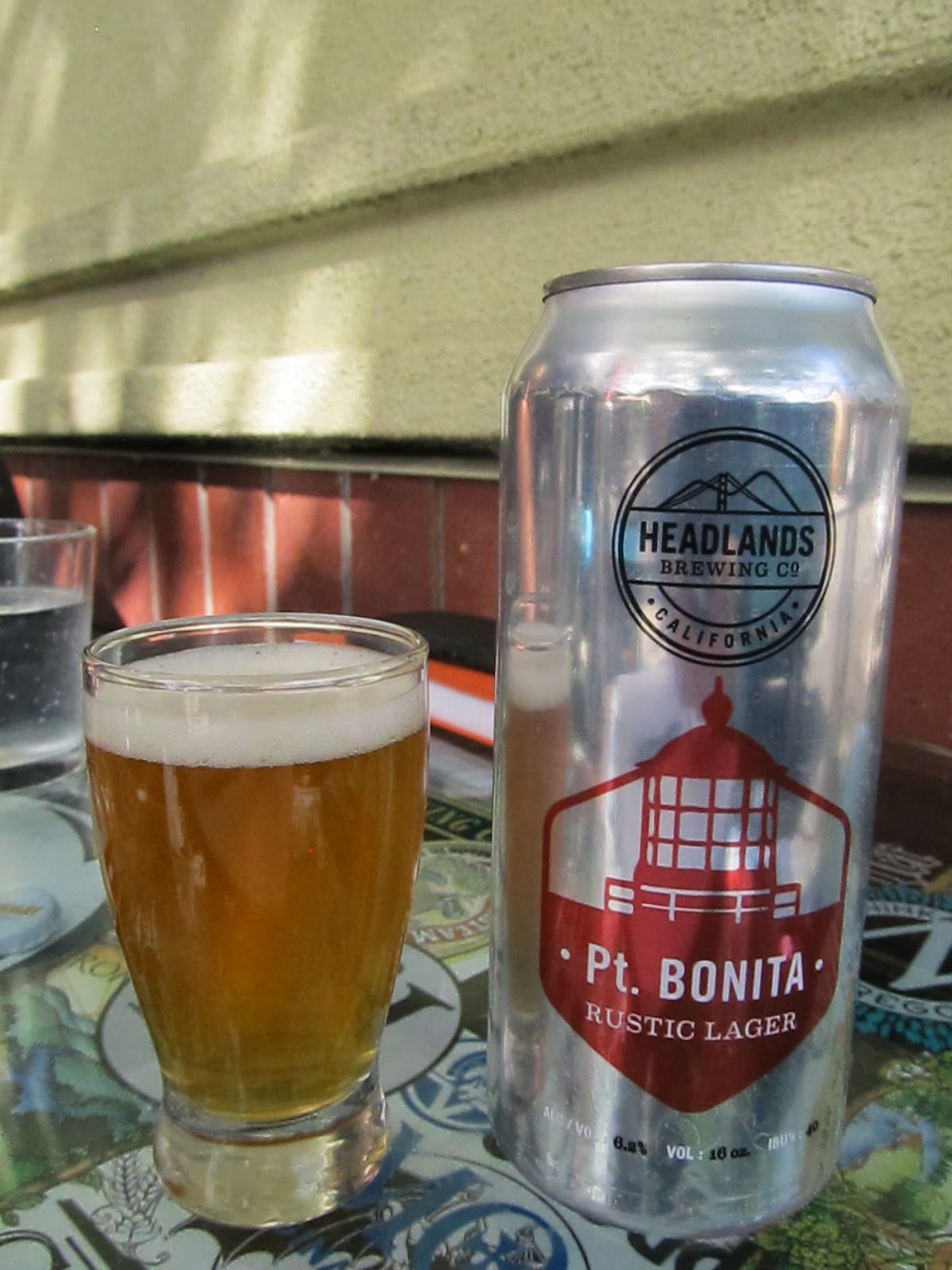 Point Bonita Rustic Lager (6.2% abv, 40 ibu)
Lager's are decidedly unsexy in the craft beer world, the style suffering from guilt by association with tasteless lagers from soulless multinational corporations.  Beers like Point Bonita go a long way in changing that perception.  It has a substantial, almost creamy mouth feel and 17% of rye malt in the grain bill gives it a peppery character that melds nicely with the Liberty, Crystal, and spicy Saaz hops.  Quite possibly my favorite Headlands Beer.  If it's possible for a brewery to make a sexy lager, Headlands has done it.

Groupe G Belgian RyPA (7.6% abv, 65 ibu)
Rye makes another appearance in this riff of the IPA style, and Belgian yeast lends it usual aromatic qualities.  A unique blend of Mosiac, Warrior, Glacier and Ahtanum hops impart a tropical and slightly floral character to the brew.  There's a lot of flavors going on there which isn't always a good thing, but here, they all come together really well. 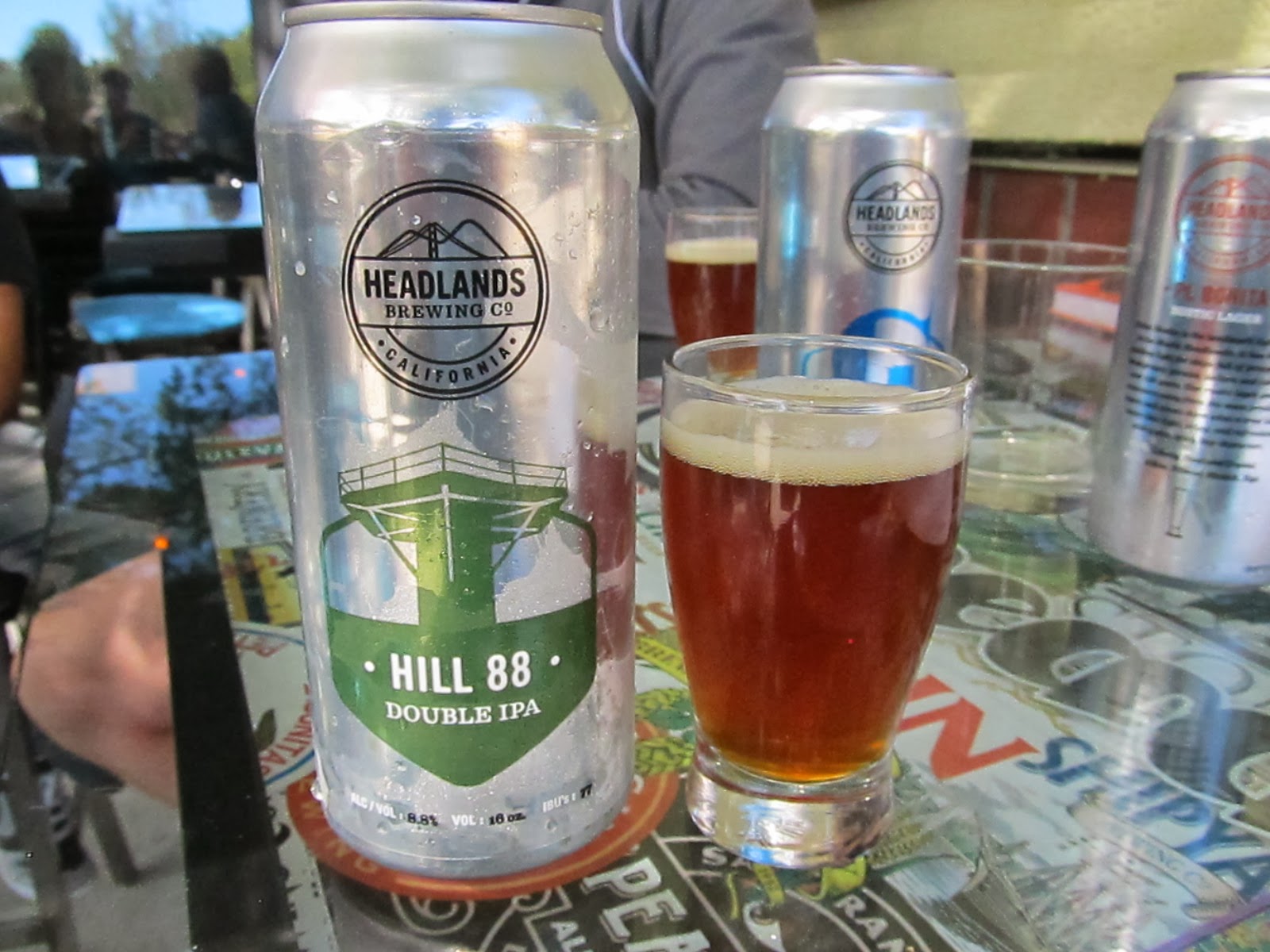 Hill 88 Double IPA (8.8% abv, 90 ibu)
As Patrick Horn poured this one, he declared, " Lots of breweries make double IPAs by cramming as much hops as they can into them.  There's a time and a place for that, but it's not what we wanted to do here."  True, any new craft brewery is almost obligated to release a double IPA and there's effectively an ibu arms race going on amongst a lot of craft breweries which thankfully Headlands has declined to participate in.  Believe it or not, at 90 ibu's, this one comes seems quite balanced.    A malt bill including Crystal, Victory,  and Carapils    results in a pretty dry double IPA, and the blend Summit, Chinook, Centennial and Ahtanum hops shine through without becoming overwhelming.

Those three beers comprise Headlands' current line-up available in both cans and on draught.  Now we get to the really good stuff, the special releases Headlands has available only on draught. 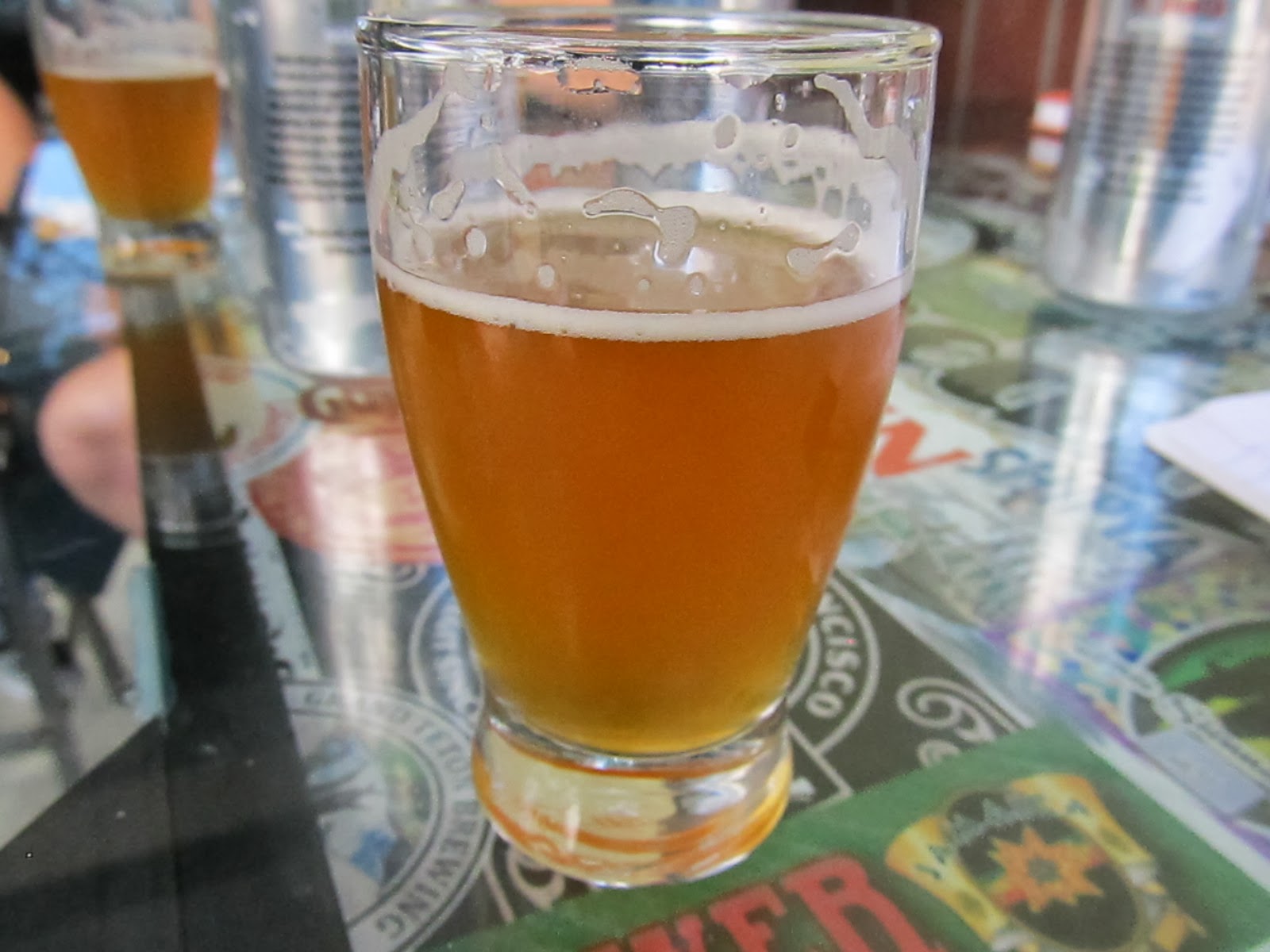 This Belgian Triple is brewed with coconut and demerara sugar.  As Patrick Horn explains, "Coconut sugar has a high level of unfermentable content, so it leaves behind of a lot of coconut character."  The result is a coconutty, tropical flavored Belgian triple.   Just when I thought I've tasted pretty much everything, Headlands comes up with something totally new and original, at least to me.  Absolutely delightful.


Liver Let Die Smoked Black IPA
The name is an odd homage to boxing great Smokin' Joe Frazier who passed away due to liver cancer last year.   Black IPA's are always a difficult balancing act between the strong roasted malt flavors and bitter hop flavors.  Headland's ups the degree of difficulty by adding yet another strong flavor to balance with 4.7% peak smoked malt added to the mix.  And it's smoky!  The malt also lends a strong chocolaty character which the Simcoe and Centennial hops match in their intensity.  Quite a balancing act and they pull it off. 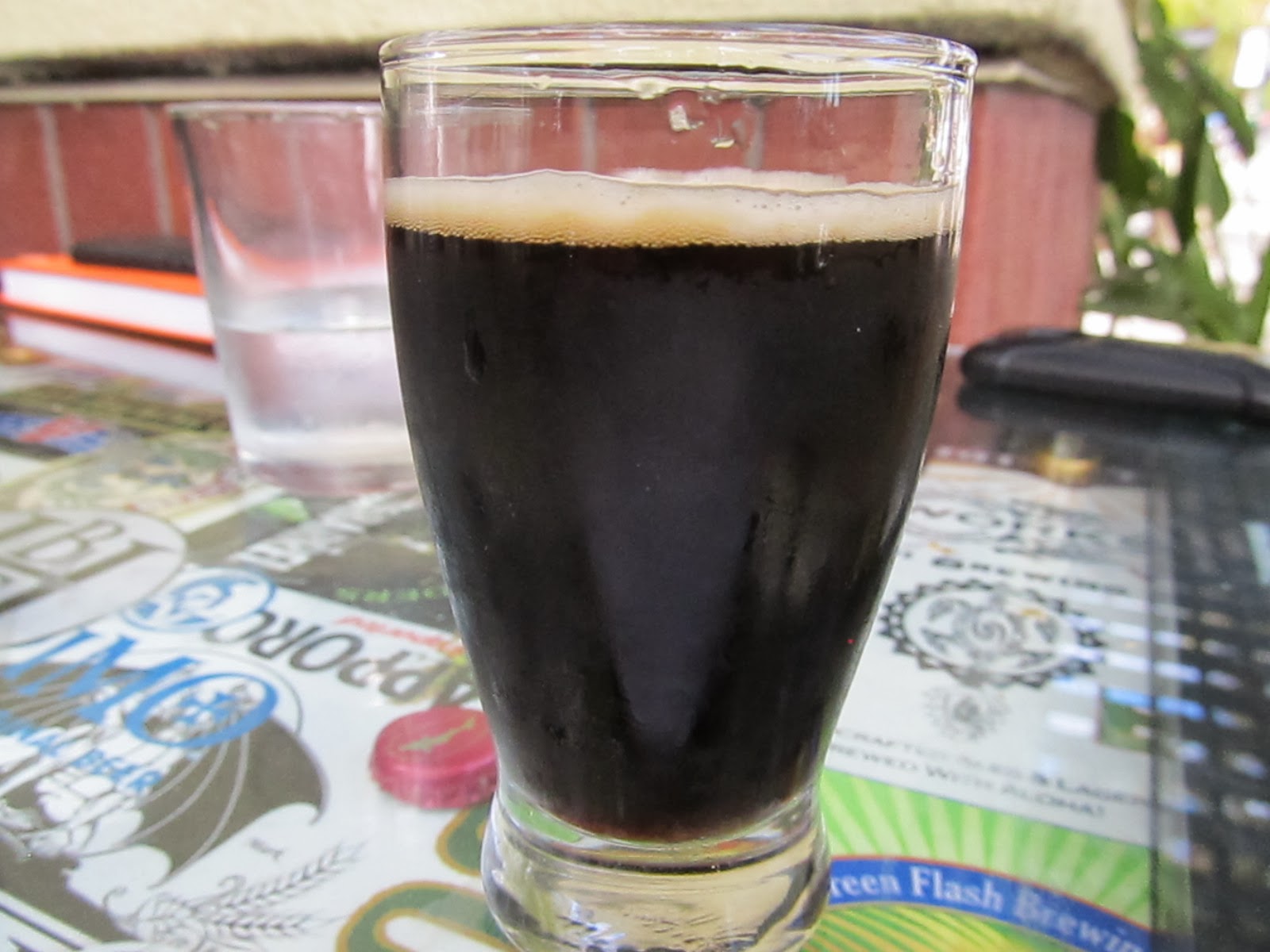 What's next for Headland's as far as the beer is concerned?  They have a Fall Saison in the works, brewed with green peppercorns and fresh chanterelles to give it an earthy character.  Phil Cutti has brewed with chanterelles many times before but admits, "I've never brewed with them as large as this one, so ramping up will bit of a crapshoot".  Considering the various risks they've pulled off in their other brews, I wouldn't bet against him.


While they clearly know brewing, Cutti and Horn have a strong business sense as well.  I asked them point blank, "With all the new breweries and the market in danger of over saturation, are you concerned?".  Patrick Horn conceded, "I think we're going to see a consolidation.  But we're smart enough to navigate through that."  Horn went on to say, "We have hop contracts in place which is important.  Hops are a big expense in making beer and a lot of new breweries don't have hop contracts, and either unable to get them, or have to pay high prices for them when there's a shortage."    Phil Cutti added, "We have investors who know our business well, have dealt with things like market bubbles before, and they give us a lot of good direction."  Headlands has also recently hired Inna Volynskaya to handle the finances.  Volynskaya brings an MBA from Presidio Graduate School and supply chain experience from Lagunitas to Headlands and as Horn casually explains "she yells at us when we're being idiots."

It's encouraging to hear about their solid business foundation because I looking forward to enjoying many a Headlands brew for years to come.
at October 07, 2013