Back on the Track Again, and the First Annual Brewing Network Winter Brews Festival 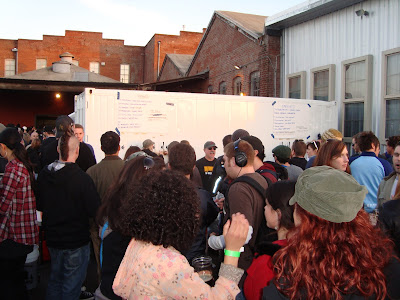 Recovering from some hip and knee injuries, it's been months since I hit the Los Gatos High School track for the Saturday morning tempo runs with my usual training group. (Tempo runs are typically 20-25 minute run at comfortably hard pace and are designed to train the body to produce less rubber-leg inducing lactic acid.) It was great to be back, working hard at the track. Everyone was talking about the races they planned to run this year, as Winter is often a time of long term preparation and running optimism, where running plans are laid down for the year. And it felt great to reconnect with the small community of runners I've known for years, which I feel proud to be a part of.

Later that day, I trekked up with my girlfriend Linda to Oakland for the Brewing Network Winter Brews Festival held at the Linden Street Brewery. What was the most memorable about it? Well, despite most of the beers and food running out, plenty of long lines, and porta-potties that made everyone nostalgic for waste management practices of 17th century London, I can't recall a single negative comment, or even the slightest amount of obnoxious drunken behavior from anyone. Everyone was there to have a great time, and no matter what happened, they were bound determined to do so. We were in the company of complete strangers, and yet everyone seemed like old friends. One guy even whipped out a fat joint and seriously offered it to me after overhearing me talk about my lack of marijuana experience. Of course I declined, but you gotta love the gesture. I've been running for 30 years, and my craft beer epiphany occurred less than three years ago, but it's festivals like this that make me proud to be a part of the craft beer community.

Oh yes, what did we think about the beer? Well, my favorite of the evening was "Shorty's Vendetta" by E.J. Phair brewing. Rich, malty session beers are always a favorite of mine, I appreciated its caramel and slightly sweet character, with a slightly astringent bitter hop finish. I don't know why Shorty's on a vendetta, but maybe Shorty just ought to relax and have a couple of these beers.

Linda's favorite was Ninkasi Brewing's Believer Double Red. She let me try it, and by that time, my palate was pretty worn out, so could barely taste it, and didn't take any notes on it. I've learned it's wise to trust her judgement. Also notable was Iron Springs Coffee Porter, which had a strong espresso-like flavors on top of the roasty malt goodness, and that works pretty well for me. Since my next homebrew will be a coffee porter, I had a particular interest in this.

Finally, I eagerly lined up for some Uncommon Brewers Bacon Brown, since they have some top secret process to introduce bacon into the brew. Bacon usually makes things better, but not here. There's a greasy smokiness to this murky tan and muddled brew, and it simply didn't work by any stretch of the imagination. I love Uncommon Brewers Siamese Twin and appreciate pushing the envelope and getting creative, but sorry guys, we just didn't like it. 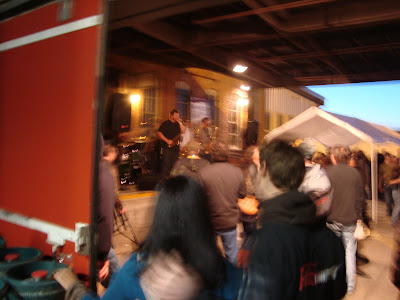