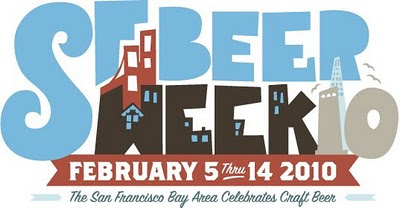 With the Beer Run over, I wanted to catch some of the action at the Barley Wine Festival being held at the The Toronado. Of course, there was no place to shower before heading over there, but I was able to dry myself off a little and change clothes in my car so I didn't smell too funky. Of course, if you're put off by a little body odor, you're probably not setting foot inside The Toronado.

Not wanting to go in on an empty stomach, I first stopped at Memphis Minnie's , which is located just across the street from The Toronado. How good is the barbecue there? Well, let me put it this way. When barbecue aficionado's from Red States like Texas, Missouri, and Tennessee rave about a place smack dab in the middle of Nancy Pelosi's district, you know it's pretty damn good. Since there was no seating available inside, I figured I'd just sit outside on the sidewalk and enjoy my pulled pork sandwich with collard greens. Memphis Minnie's deliberately avoids drowning their meat in barbecue sauce, a common mistake of lesser establishments. Memphis Minnie's knows how to smoke dead animals to perfection, and are happy to show off their skills without any sauce getting in the way, even though their peppery red and mustard sauces are as good as any you'll find. 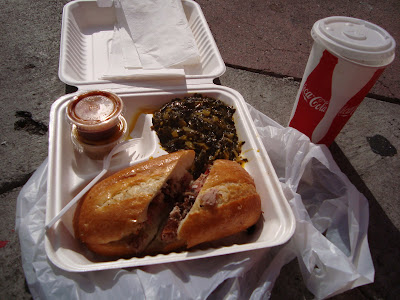 With that taken care of, it was time to head across the street. I figured the crowd would be small on a Saturday afternoon. In relative terms, that was certainly true as I could just walk into the place, without waiting in the long lines that ran for nearly a block which would develop later in the day. That said, The Toronado was pretty packed inside for the Barley Wine Festival.

The Barley Wine Festival is held over the last weekend of SF Beer Week, and over 40 different Barley Wines are served and judged, with the winners announced Saturday evening. The judging does not actually take place at The Toronado, but next door at Noc Noc, since beer judges are a bit of a sensitive breed, and when contemplating the nuances and subtle differences of barley wines, generally do not believe a loud bar, crammed fall of people, with punk rock blaring out of the speakers is a particularly good place to do this. 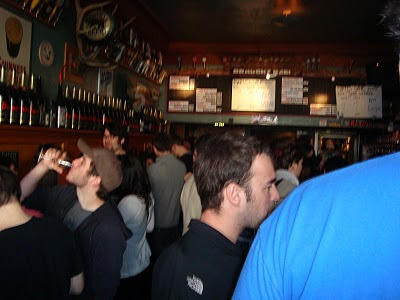 I joined the polite rugby scrum around the bar and made my way towards the front at a speed of roughly one inch per minute. At the epicenter behind the bar was a well built man with a white muscle shirt showing off his brightly colored tattoos covering his arms and torso, and a woman with thick rimmed glasses who could pass for a school teacher, gliding around behind the bar filling everyone's orders. After making it to the front in about 30 minutes, I shout out my selections to the woman in the thick rimmed glasses, ordering two barley wines to avoid having to get fight my way through the rugby scrum again. She hands over my selections and I find a less crowded area, near the front where I have a grand total of six inches of personal space.

Barley wine is a style I definitely enjoy in its many forms, although I notice many brewers, especially on the West Coast, using hefty doses of hops, going for big flavors, but often creating something I find a bit harsh and almost painfully astringent. That was the unfortunate case of my first selection, which I simply didn't like very much for that reason. My second choice, Pizza Port's Farley Barley Wine, aged in bourbon barrels, was way more to my liking. The bourbon barrel aging gave it a smooth, very easy drinking character with vanilla and bourbon notes with a slight woodiness in the background. It was just very enjoyable and the hefty 13% abv is barely detectable.

Standing there sipping the barley wines all by myself, it was fun looking at all the beer memorabilia and reading all the beer bumper stickers plastered to the walls. Several times I was inadvertently jostled by others trying to get their barley wine fix, and was asked about five times "How do you order in here?" as if there could be possibly any order to the chaos. It was all very stimulating at first with all the noise, pungent tastes and aromas of the barley wines, taking in all the sights, and constant brushing contact with those around me, but after about an hour of this, my senses were pretty maxed out, and with barley wines consumed, I had about enough. Maybe I'm just getting too old, but needed to seek the refuge of Haight Street.

I made my way back to Magnolia and ordered their Let It Rauch! Smoked Strong Ale. One of the many things I love about craft beer is that even after tasting hundreds of beers from so many creative brewers, there are still plenty of beers that make me sit up and say "Wow!". This was definitely one of them. Lightly smokey and sweet, very smooth drinking with some background flavor like rum or butterscotch I struggled to identify, it was just a joy to drink.

Craft beer is part discovery, and whether participating in a small informal event like the Beer Run, the intensity of The Toronado Barley Wine Festival, or just a quiet moment at Magnolia, it had definitely been an afternoon of discovery.