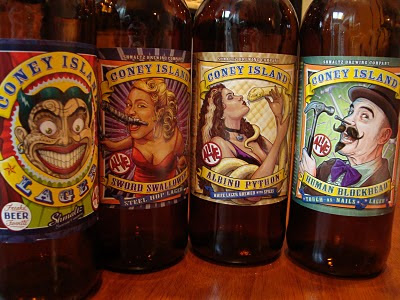 Lagers get a bad rap. There's just so many of them, and most of them are pretty much the same, and rather forgettable, and as a result, many beer geeks are rather dismissive of the style. There are some good ones if you look hard, and I've long thought the best ones have pretty straightforward, simple, sharp flavors that work well together. But recently, I discovered even this point of view was pretty limiting when I tried four lagers from Shmaltz Brewing's Coney Island Lager Series.

In each beer of the series, Schmaltz uses complex combinations of malt and hops, and in one case spices, to create pretty unique lagers. At first, I was questioning whether they could even be called lagers, until I looked up the Beer Judge Certification Program style guidelines. Sure enough, there's plenty of different lager styles out there that we rarely see, and thanks to Shmaltz, we can experience some examples of them.

The label art for each beer in the series is based on traditional Coney Island side show art, and in addition to preserving the visual look of Coney Island, a percentage of the sales of these beers goes to Coney Island USA, Coney Island's resident not-for-profit art association.

OK, well that's nice. So what are the beers like?

Coney Island Lager
The base beer in the series, it has a rather sturdy, biscuit like malt with a straightforward bitterness. Not so much a lawnmower-type beer one thinks of a lager, its more malty than the usual lager and more substantial.

Coney Island Sword Swallower
It seemed like they cranked everything up a notch from the Coney Island Lager for this one. It's even more maltier than the Coney Island Lager, with a slight caramel character and a little sweetness. All this malt is well balanced by the straightforward bitterness of the hops, which had no fruity, floral or herbal character one might expect. I'm not a big into food and beer pairings, but this seemed like half a great combination with the right food, or might work well as an aperitif. What that's right food to pair with this? You're asking the wrong guy.

Coney Island Albino Python
A wit lager? It's pretty zippy, with orange zest, ginger and crushed fennel giving way to a smooth herbal finish. A pretty unique beer with flavors that seem in the witbier style. And Schmaltz has picked up some awards with this one, such as the Silver Medal at the Hotoberfast in Atlanta in the Best Brew Competition last October. Albino Python also took 1st Place in the "Other" category at the West Coast Brew Fest in Sacramento, CA held last May.

Coney Island Human Blockhead
A nifty combination of flavors. A little toasty, a little sweet, with a raisin or dried plum character, and a little alcohol heat from the 10% abv, and then the slightly herbal hops smoothly kicked in. What really makes this beer for me is the clear, fresh character it has with all those flavors going on, which could easily get rather muddled. It took Second Place in the "Strong Lager" category at the 2009 Manitou Springs Craft Lager Festival in Manitou Springs, CO last October.

(Shmaltz Brewing provided samples of all of the beers reviewed here, with the exception of Coney Island Lager.)
at February 02, 2010