Brews on the Bay 2011: Peace through Beer and Mutual Hatred 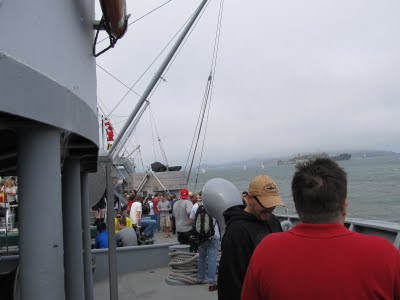 And there was plenty of great beers to chose from. Perhaps since this festival has been condensed from a two-day to single day event, all the breweries had much larger selections than they have in years past. And it was nice to see Anchor Brewing show up this year. Kudos to Magnolia Pub for rolling out plenty of interesting session beers. Double IPAs and Imperial-styles seem to dominate festivals, but their skillfully brewed milds, bitters, and Kolsch session brews were a breath of fresh air. The worst beers were OK, and the overwhelming majority were good to great. But then, one of the best things about San Francisco is that its breweries always deliver great beer. 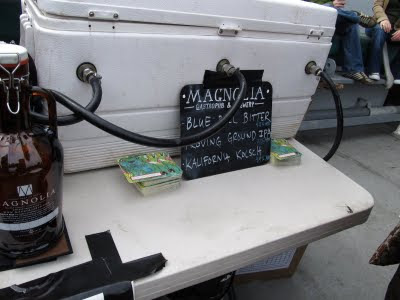 And it was a pretty chummy brewing community on the ship, with plenty of brewers hanging out at other brewer's pouring stations chatting away and sampling each other's beer. In fact, this feel good vibe was so infectious I actually had a pleasant conversation with not one, not two, but actually three graduates of the University of Michigan, including craft beer blogger and SF Brewer's Guild social media whiz Brian Stechschulte. This may not seem like a big deal, but as a graduate of The Ohio State University, we're usually more comfortable spewing hatred towards other. That's just the way it is.

Of course, a certain bond is created through rivalry, a respect gained by understanding just how deeply the other side disrespects you. There is a certain release in the controlled bloodlust of the game, but once it is over, most of us realize it is just a game and we're all just people. If we could only overcome our fears and take this same approach over matters like race, religion and sexual orientation.

So as we reflect on ten years after September 11th on the consequences and challenges of hate, I'll give the last word to the Dalai Lama, who said:

“We need to learn from our painful memories of September 11th and become more aware of the destructive consequences that arise when we give in to feelings of hatred. This tragedy in particular has reinforced my belief that fostering a spirit of peaceful co-existence and mutual understanding among the world’s peoples and faith traditions is an urgent matter of importance to us all. We must therefore make every effort to ensure that our various faith traditions contribute to build a more caring, peaceful world.”
at September 11, 2011