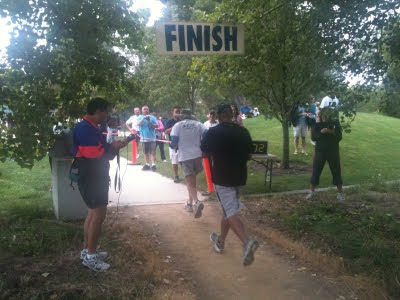 I guess there's little point in noting the oxymoron title of Labor Day, since it's a given few people work on it. Or if they do, it's work they've chosen willingly. Like a Labor Day morning 10k run.

If I had to describe how the race felt in a single word, it would be workman-like. (OK, that's two words connected by a hyphen.) World Runners, an organization trying to end world hunger put on the Labor Day race that morning in Sunnyvale Baylands Park was mostly on flat gravel trails, so there were no hills to contend with, but lots of soft crunchy gravel. In those conditions, best just to keep the arms moving, the legs churning, and work right through the course. I kept maintaining a steady pace, and passed a couple people at miles 2 and 3, but by the time I got to mile 4, it was one of those "the guy behind me isn't going to catch me, but the guy in front of me is too far away to get either" deals and so told myself to " just keep working" to get to the finish line. A 39:49 was slower than I expected to run, but then I didn't figure on being second master in the small race, so I guess I'll take that. I've got seven weeks of training to put in before the next race, the Grape Stomp Half-Marathon in Livermore. Not a lot of time, but enough to get some good runs in, get some extra tempo work on the track, and improve upon the Water to Wine Half-Marathon three weeks ago. (Why do I keep doing all these wine themed races?)

Speaking of Labor Day labors, I spent the afternoon brewing a Chile Habenero Stout. Yep, pretty ambitious to brew with chiles, especially since I'm having enough trouble brewing with malt and hops. But to my way of thinking, winging ingredients to come up with a unique, personally designed beer is a lot more fun than trying to perfect a Marzen, or copy beers already commercially available. Especially since the secret to homebrewing is spenign a lot of time cleaning a whole lot of stuff, which quite frankly, isn't a whole lot of fun, so you might as well have fun with flavors.

As for the stout, so far so good. Tasting the wort, the heat level was about where I wanted it, just a little noticeable, but not overpowering. The idea for this beer came from good Mexican chocolate, where there's plenty of flavors going on and little bite of heat at the end. That's what I'm hoping for anyway. Being a lot more confident I killed all the nasty bugs ruining my previous batches and rinsed the cleaning solution off the carboy that muddled the last brew, I'm feeling pretty confident about this one.

Brewing is a lot like running. Put in the well directed hard work and concentration and with a little patience, good things start happening. 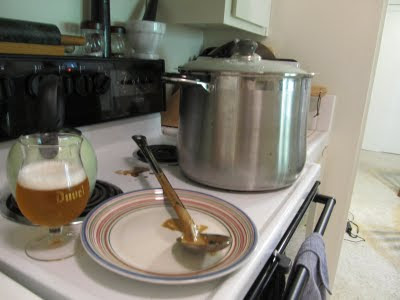