The Refuge in San Carlos is just that 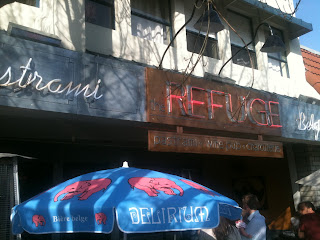 What exactly is The Refuge a refuge for?  Located at the edge of an eclectic mix of ethnic restaurants and boutique stores along Laurel Avenue in comfortably worn, upper middle class San Carlos where there doesn't seem to be any reason to take refuge.  For whatever reason you set foot in the place, you'll be greeted with a great selection of Belgian beers with a smattering of California brews.  They also supposedly have a good wine list if you're in to that sort of thing.

The Refuge also has a full menu with plenty of selections, but there is really only one thing you need to order here: some seriously killer Pastrami sandwiches.  Whatever alchemy they possess to transform beef and spices into succulent morsels of dark pink meat held between to slices of crusty rye bread, it is a tightly held secret.

What, you ask, is the connection between seemingly divergent traditions of Belgian beer, French wine, and Jewish delicatessens?  Refuge Owner/Chef Matt Levine, who's worked in Michelin-starred restaurants and has extensively studies French cuisine, recognized the parallels between the French art of charcuterie (curing meats)  and the delicatessens of his Jewish heritage.  Which is perhaps why this unique combination of different traditions doesn't seem forced or contrived, at least the way The Refuge does it.

Nor does a large black and white photo from the 60's of a reverent, contemplative Muhammad Ali seem out of place amongst the modern art and classic beer signs adorning The Refuge walls.  Somehow, the place seems to embrace different cultures effortlessly.  A very Bay Area trait when you think about it.

And while the Bay Area looks like an idyllic place from afar, the traffic is ridiculous, the housing pricing even more so, and the high-octane business culture can make earning a paycheck pretty stressful.  Life can be hard anywhere.  So when you need a refuge from all that, The Refuge is definitely the place to go to seek respite. 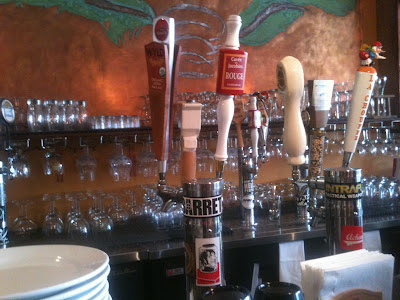