Beer of the Month: Biere de Mars 2012 from Almanac Brewing 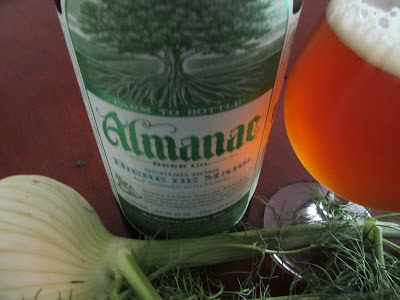 I've made up some hypothetically silly beers with odd ingredients on this blog to poke some good natured fun with brewers who push the envelope with their experimental and extreme beers.  But I never got so crazy to suggest any brewer might use fennel.  Then wouldn't you know, Almanac Brewing puts it in their Biere de Mars 2012.  And what's really irritating is that the fennel actually works.

Almanac is no stranger to taking risks and putting unique contemporary twists on traditional beer styles with their "farm to table" concept.  And unlike other breweries, they make it look natural and unforced, rather than forcing flavors together that ought to be left separated, as I discovered with their first release which used a grand total of four varieties of blackberries and citra hops. They they even aged it in used, oaken red wine barrels and somehow avoided making an overblown monstrosity, but instead created a delightfully subtle, nuanced beer.

This Spring release from Almanac sports a  lightly toasted and slightly sweet malt.  There's flavors of honey and fig flavors with  a herbaceous bitter finish and a slight anise-like notes, presumably from the fennel.    It's a totally unique and unprecedentedly taste composition that completely works.

And not only does the beer work, it proves the adage "You need to know the rules before you break them".  The underlying ale is would be a great beer all by itself without any fennel or other weird beer ingredients.  The fennel just takes something really good to the next level.

Ever since they starting brewing, I'm always waiting to see what Almanac does next.  I just hope they don't get any bright ideas with Lima beans.
at July 11, 2012