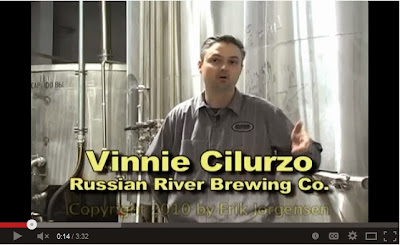 I recently discovered some interesting, informative documentary videos Erik Jorgensen, produced with Russian River's Vinnie Cilurzo. It was part of a 40-minute documentary Jorgensen made back in 2008, right after Russian River's production facility opened but they remain fresh and relevant today.   You can find them here at his Maximum Microbrews website.

What's next for Erik?  He's in the process of opening a brewpub in Logan, UT.  It's an odd coincidence the headquarters of the company I work for as a regional sales manager happens to be located in Logan, UT and I return there two or three times a year for sales meetings.  With it's large Mormon population opposed to alcohol consumption, anything matter related to alcohol is a contentious issue in Utah.   Opening up a brew pub is a monumental task any where, but even more so in Logan is no small task.  A recent New York times article on a city-wide vote to allow alcohol sales in Hyde Park, located near Logan, outlined how divided the community became over this issue.  While Utah has some great beer, it could certainly use a few more brewpubs so look forward to the day I enjoy a pint in Logan from Erik's latest endeavor.  Let's raise a glass to his success!
at January 02, 2014