Tony Magee vs. Sam Adams's Rebel IPA : Much Ado about Something

Sam Adams's has just entered the IPA race and Lagunitas's Tony Magee isn't happy about it.  Magee thinks Sam Adams's is directly targeting his brewery.  Sam Adams describes their Rebel IPA as a "West Coast Style IPA, brewed for the revolution" and it certainly does sound like they intend to compete with all the great IPAs out here on the West Coast, including Lagunatis's flagship IPA.

Magee started things out with a series of tweets accusing Sam Adams's of specifically targeting Lagunitas and other breweries.   His first couple missives are below. 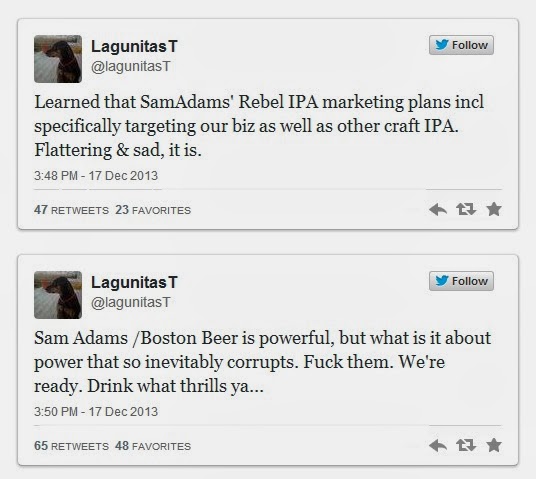 I find Magee's comments on Twitter are best viewed as fascinating performance theater rather than any meaningful form of commentary.  Those outside the chummy craft brewing industry must certainly be puzzled by accusations of one brewery having audacity to actually compete with another one.  Of course, the outspoken Magee has plenty of people in his verbal cross-hairs .  Usually, it's mega-breweries like InBev AB, Molson Coors, or authorities such as the Federal Alcohol Beverage Control.   Magee has even taken on other craft brewers on Twitter.

Such as Magee's tiff with Knee Deep Brewing in November of 2012.  Knee Deep started bottling their IPA in 12 ounce bottles with labels resembling Lagunitas's flagship IPA.  Privately and quietly pursuing resolution through normal legal channels just isn't Magee's style, so instead he took to Twitter with his grievances.  The matter was settled,  but since Lagunitas is several times the size of tiny Knee Deep Brewing, many people, including myself, found Magee's heavy handed tactics amounted to bullying around the much smaller Knee Deep. Magee seemed to just shrug and move on.

Don't let all the goofy stoner and anti-establishment humor surrounding Lagunitas's fool you.   It's one of the largest and fastest growing craft breweries in America and they're marching into plenty of other brewery's turf. Lagunitas will open a second brewery and tap room in Chicago this year as part of their growth strategy. The whole craft beer pie is growing, but it's simply not plausible to assume that Lagunitas's tremendous growth hasn't come at the expense of other craft brewers and is a direct result of Magee aggressive expansion plans.

When Sam Adams, one of the few breweries in America larger than Lagunitas, launched Rebel IPA, it seemed natural for Magee to go on Twitter to confront Sam Adams.  After all, the face of Sam Adam's is billionaire Jim Koch, who founded the Sam Admas after leaving a large corporate consulting firm.  Koch is just the kind of guy Magee typically thumbs his nose at.

In a BeerAdvocate discussion forum, Magee further clarified his rambling Twitter accusations in a long rambling post which included:

"Here's the way I see the scenario: This particular thing is really more about Craft brew marketing and it's future than it is about me or Lagunitas... One of our largest distributors (in fact ABI's 3rd largest) on the east coast was told directly by Jim's senior-enough marketing people (they sell both of our brands) that the roll-out of their IPA was going to target our draught IPA business for replacement. This 'program' would roll westward over time. Some here said that 'everybody does this'. That's not true. A perfect example was how Torpedo (an IPA brewed by Sierra Nevada) and Ranger (New Belgium's IPA) went to market to be alongside other IPA's... and then you, the beer lover, could decide which stays and which goes, if either. THAT is very constructive and makes us all amp up our game. Targeting for replacement is precisely what ABI/MC/Etc do when they go to market. The thinking being that that retailer will sell whatever is on tap and NOT SELL things that are not on tap. This approach sees beer as a commodity, which it sort'a used to be, before Craft."

"......at Boston Beer, we compete against ourselves and our own ideal – to brew the best beer we can. We don’t target other craft brewers. When we walk into a bar or restaurant for a sales call, we ask questions so we can get a better understanding of what beers are selling and what’s moving more slowly. With that in mind, we hope retailers will make decisions that benefit their business and their drinkers and hope they pick the best beer. Ultimately, it’s the retailer who makes the final decision on what beers to serve on draft. Distributors also make their own decisions as we saw in the memo from the Lagunitas distributor going after Sam Adams. It makes sense that a good distributor would work hard to sell beer. It's their job to try and replace competing brands."

Usually when these skirmishes arise, which are becoming more commonplace in the industry, somebody raises their hand and asks, "Isn't this supposed to be about the beer?"  On that score, Magee is the hands done winner.

As IPA's go, I found Rebel IPA to be surprisingly tepid and punchless, lacking the fruity, floral characteristics and aromatics of the best West Coast IPA.   Lagunitas's brews a real West Coast IPA, while Rebel IPA comes across as a soulless product, deliberately toned down for mass market appeal. In the unlikely event Budweiser decided to release an IPA, it might taste something like "Rebel IPA". Looks like Tony Magee may once again have the last laugh.