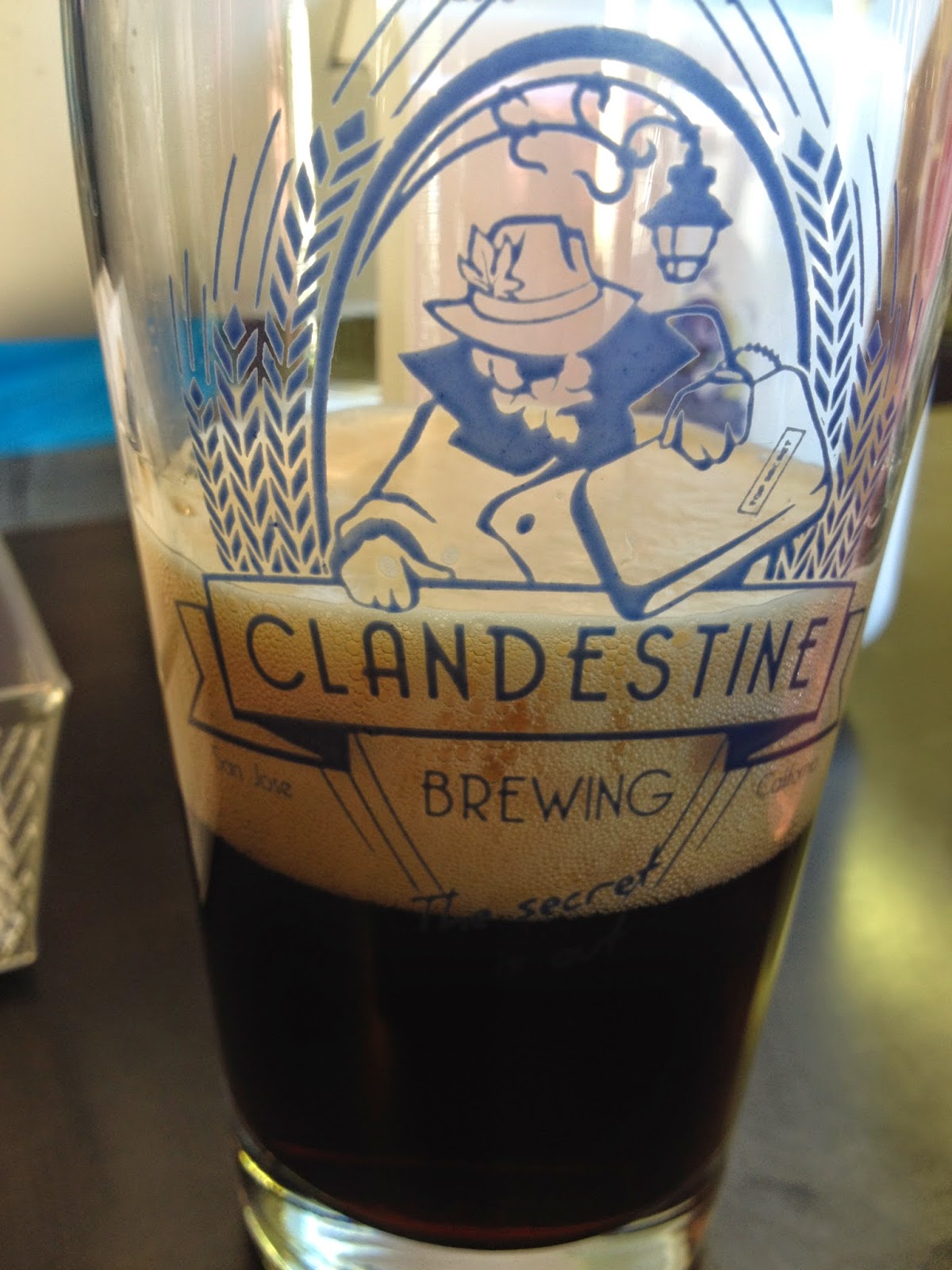 A new kind of brewery has emerged in San Jose.

Breweries used to be these massive factories pumping out millions of gallons of beer that was all the same and shipped hundreds or thousands miles away. In the last two or three decades of America's brewing revolution, smaller breweries evolved. They were still factories designed produce in volume, but brewing a wider variety of styles and tended to serve more local markets. Then there are breweries like San Jose's newest brewery, Clandestine Brewing, that's one of those so called nanobreweries.   Clandestine is more like a tight home brewing collective with a license to sell beer at it's tap room to the local community. They have no flagship beers and they like it that way. Instead, there are eleven beers on tap with all sorts of different ones going in and out of rotation.  Going to Clandestine Brewing for beer like going to down to the bakery to fresh made bread rather than picking up of a mass produced loaf at the supermarket.

Clandestine has only been open for business about a month and I finally got to check the place out last Saturday. Despite being located in a small industrial park in the middle of San Jose, the place has an informal, neighborhood feel.   One of the brewers will even give you a brewery tour which lasts about 5-10 minutes as the walk you through the various stages of the brewing process in a space the size of a large garage.

You might think their small operation would be stretched thin producing so many different beers, but most of their brews are pretty tasty. And to me, the best thing about their tap list is that it isn't chock full of a bunch of wild and crazy IPA's with maybe an Imperial Stout or Pale Ale thrown in for good measure.  There's a real respect for brewing traditions and a genuine diversity of beer styles, flavors and brewing techniques in Clandestine's beers.


So let's get to the highlights from last Saturday afternoon when my wife and I stopped by the place and took in a sampler flight. Adrian, one of Clandenstine's four brewers, was behind the counter that afternoon. and gave us a friendly tour through the various offerings as we tried them.

dOrt - Brewed in the Dortmunder style, this light, crisp beer had a refreshing tartness and light hints of lemon.

BND - I find Hefeweizens in the United States to be a hit or miss proposition, with some of them being rather tasteless and uninteresting.  This one works well with a nice light bubble gum-like esters.

Gratzer - Described as a "Smoked Beer" this light, tart beer had (surprise!) a nice smokey aftertaste.

Brush Pass - This is a Roggenbier, a traditional style rarely found today.  Adrian explained was Roggenbier is, but I was enjoying the beer so much, I forgot to write it down.  It's brewed with rye, giving the dark brew some peppery-ness, with some woody notes.  It's one of those beers where you can focus either on its complexities, or simply ignore than as they provide a great background to whatever else you're doing.

Van Dam Hoppy - A Belgian IPA brewed with Amarillo, Columbus and Warrior hops. The result is a classic citrus and floral West Coast IPA with some aromatics from the Belgian yeast for good measure.

Adamatium - The name is a play on the beer "Hair of the Dog Adam".  The style is an Adambier, another old traditional German strong ale.  Adambier's are typically sour, but this one wasn't. Instead, it was brewed with smoked and dark malts giving it a smokey savory character with some sweetness, tasting almost like barbecue in a glass.

Hopothetical: Azacca Hop - Part of Clandestine's single hop Pale Ale series which highlights individual hops, this was both my wife and my favorite of the afternoon.  The  light crisp, dry malt and Azacca hops combined to give a unique and pleasantly unexpected Jasmine flavor to the brew.  Apparently, Clandestine has all sorts of specialty hops stashed away for upcoming Hopothetical brews, so there are plenty of novel hop flavors from Clandestine to look forward to.

Clandestine's tap room is open Friday afternoons from 4pm-9pm, and Saturday's from 2 pm to 9 pm.  The brew on Sundays.  They rotate plenty of beers in and out of their rotation.   It's a place to check out a new type of brewery innovating with beers both traditional and contemporary.