Once again, time to ramble on about a three brews that recently crossed my path. For this installment, I'm keeping it local as all of them are from the Silicon Valley.

First brew up isn't a brew but a wonderful cider from a gem of a place I recently discovered, even though it's been around for a couple decades. It's Red Branch Cider, brewing mead since 1995, and making cider starting in 1999. I recently stopped in on a cold night to sample a number of their wide ranging fermented creations from mead to ciders to beers to even an excellent port. One of the high lights was their Peach Cider.  The first thing that hit me was all sorts of wonderfully peachy aromas. As for the flavors, wonderfully clean, vibrant peach flavors dominate the underlying base of crisp apples. Delving a little deeper beyond the lightly sweet fruit flavors reveals a light floral character from the honey and a slight tannic finish.  This cider has lots of stuff going on and it all works together exceedingly well. 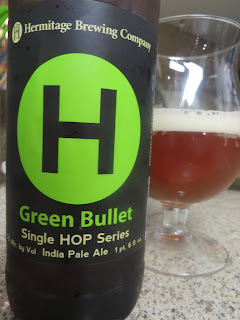 Next up is the latest from the folks at Hermitage who regularly explore the wild world of hops with their Single Hop IPA series.  The latest brew in the series features the Green Bullet hop from New Zealand. It's a new hop finding plenty of work these days, most notably featured in a major Green Flash release. As for the Hermitage version, this brew is full of fresh pine and grassy flavors, with some lemon and pear throw in for good measure. I get the "Green" part from all the pine and grassiness, but found this hop to be more on the soft and gentle side than the word "Bullet" suggests. Once again, Hermitage takes us on another successful little hop excursion.

Finally, there is Punch List Pale Ale from Mission Creek Brewing, located at the Whole Foods Market in San Jose on The Alameda. It was a cool overcast day when I ventured into their upstairs outdoor patio to finally check this place out. This brew pours a cloudy orange, with a nice biscuit malt character embraced by light floral and slightly citrus hop flavors and aroma. I'm tempted to consider such a flavorful, yet unassumingly drinkable brew a session beer, but at 5.7% abv, an evening of putting a few of these away would be a pretty hard core session. I also have to salute a California Pale Ale that is exactly what it says it is, rather than a piney, slightly dialed-down IPA in disguise. (Not that there's anything wrong with that.) Really nice. 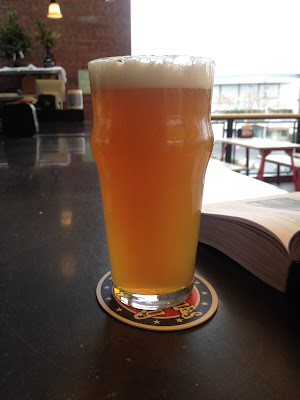