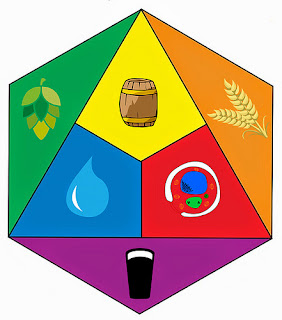 I'm just not a big fan of American Barley Wines. Sure, I'd rather start Jay Brooks's wonderful Typology Tuesday project with a more upbeat opening. But then, he invited us to write about the American Barley Wine style and that's the first thing that leaped into my mind.

I think the issue with  American Barley Wines are that are very challenging to brew. All that rich, toffee and caramel malty goodness has to be balanced with copious amounts of hops, and lots of breweries get tripped up trying to pull that off. I've had some good American Barley Wines, but found a fair share of them to be either unbalanced palate assaulting monstrosities or bloated, muddled concoctions struggling beneath the weight of all their heavy flavors. Since Barley Wines are typically priced at $10-$20 per 22 ounce bottle, I rarely take a flyer on an American Barley Wine, even if it's from a brewery I have a lot of respect for. I've just been burned too many times.

I suspect this is part of the reason we seem to be seeing fewer and fewer Barley Wines in America despite the proliferation of new breweries. Not only is the style hard to brew, it is both time consuming and more expensive to produce than other styles. What was likely biggest Barley Wine event in the United States, the Toronado Barley Wine Festival in San Francisco, has recently been cancelled, with Toronado owner Dave Keene citing business concerns and changing tastes as the reason. Economics is slowly working against Barley Wines and I'm not sure this is a bad thing. Shouldn't breweries avoid making beers that drag down their bottom line? Do we really need lots of American Barley Wines if only a few select brewers can really deliver on the style?

Don't get me wrong, I've enjoyed some of the major American Barley Wines like Anchor's Old Foghorn, Sierra Nevada's Bigfoot Barley Wine and Stone's Old Guardian. However, with Old Guardian, I must keep it in the refrigerator for least a solid year to take the edge off the hops before I can enjoy it. Now some people are into really cellaring beers and find the transformation of Barley Wines over time to be one of their alluring qualities. I'm not one of them. I just wish the brewer had dialed back the hops so I wouldn't need to go to all the trouble of storing the beer for an entire year before I can finally drink it. For me, that's just more trouble than it's worth.

One of my local breweries in San Jose, Santa Clara Valley Brewing recently released their excellent Big Moody Barley Wine which I really like. But then, Santa Clara Valley Brewmaster Steve Donohue has won four GABF medals, so the guy demonstrably knows how to brew good beer. Perhaps it's telling that Steve Donohue told me he tried to keep the hops profile low with Big Moody, so maybe it's not a true American Barley Wine after all.

To end this on a positive note, an American Barley Wine provided a nice moment the time my parents, my sister and her husband were in town for Thanksgiving a couple years ago. A bottle of Sierra Nevada Barrel-Aged Bigfoot Barley Wine had been sitting in my fridge for about eight months and I figured the moment was right to pop open the bottle for the occasion. We were all chatting away as while we all sipped from small glasses poured from the same bottle, enjoying all the wonderful flavors enhanced by time and careful barrel-aging. A slight hush fell over us as we all realized we were sharing a special, rare experience. Then, the moment passed and we all started chatting away again. Chalk up a small victory for the American Barley Wine.