Beer of the Month: OTIS by Firehouse Brewery 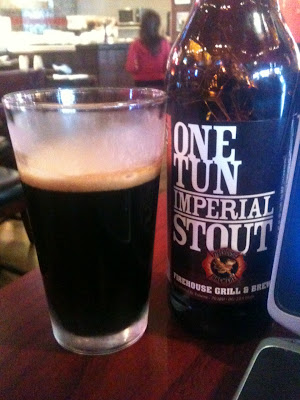 The name "Otis" has long been associated with excellence in elevators, or just "sittin' on the dock of the bay".  And we can now add "Imperial Stout" to this list of excellent Otis's, thanks to Firehouse Brewing.

OTIS is actually an acronym for One Tun Imperial Stout, as it takes literally one ton of malt in the mash tun to brew.   After looking for a bottle of OTIS in the San Mateo area without success, I finally broke down and went to the source at Firehouse's Grill and Brewery in East Palo Alto.   They didn't have it on tap or even listed on their beer list above the bar.  But I asked the waitress about it, and discovered they did have it in 22 ounce bottles.  Now sitting down for lunch with 22 ounces of an Imperial Stout and a pizza is  a perilous act.   Even just 8-10 ounces of a good Imperial Stout can fees pretty heavy in your stomach, and create a mouth feel similar sandpaper, but such was not the case with OTIS.

It's surprising smooth for an Imperial Stout, with plenty of roasty flavors of dark chocolate, with a slight sweetness, a barely noticeable alcohol heat, and a grassy herbal hop finish underneath all that bitter chocolatey goodness.  A liquid dark chocolate brownie if you will.  An amazingly drinkable Imperial Stout at 11% abv at a surprisingly high 70 IBU.

But then, if you're familiar with the work of Steve Donohue, Firehouse's Master Brewer, this shouldn't surprise you.  After all, he's won a bunch of Great American Beer Festival medals brewing traditional styles such as his Baltic Porter, or with his more contemperary beers such as the Belgian IPA Pete's Support.   And if you've read this great interview of him, you already know that.

OTIS elevates the Imperial Stout style, and it's March's Beer of the Month.
at March 15, 2012